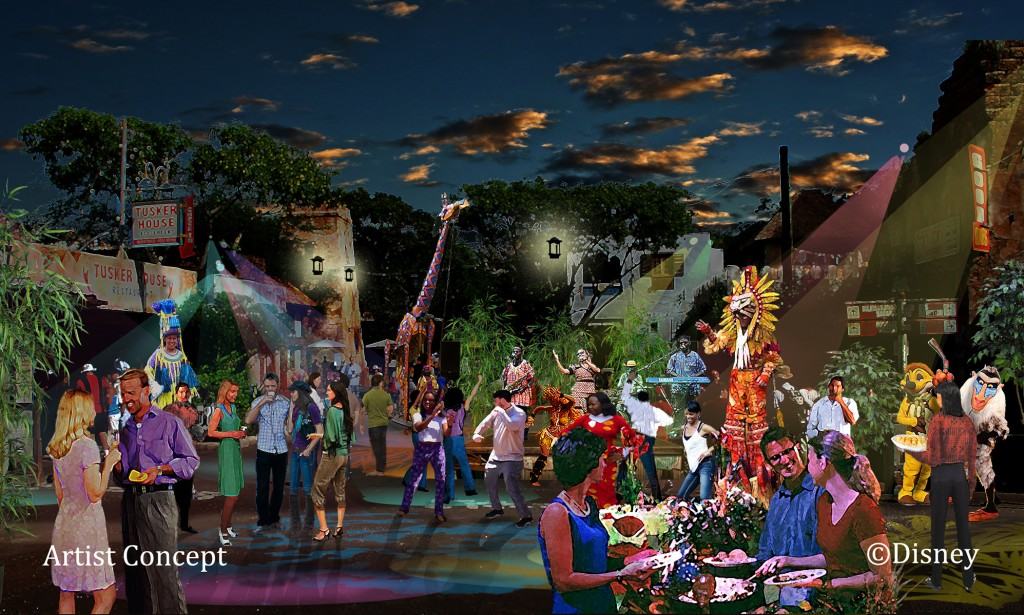 In a Disney first, Walt Disney World will present Harambe Nights, a dazzling theatrical production based on the beloved Disney classic film, “The Lion King,” and an energetic street party with gourmet dining will debut in June 2014 to celebrate the 20th anniversary of the Oscar-winning movie.

A 55-minute theatrical extravaganza, “The Lion King Concert in the Wild” comprises celebrity narrators, a live orchestra, choir and special effects to present the story of Simba’s coming of age like never before.  A lively welcome reception and the post-show street party featuring Afro-pop rhythms, performers and a buffet of culinary creations keep the celebration rocking through the evening. 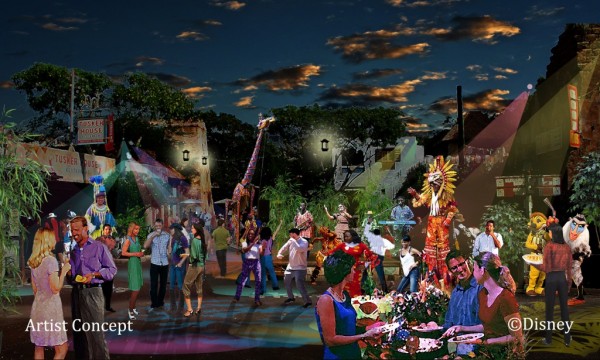 The evening begins with a welcome reception in the park’s Harambe Village where savory appetizers and a selection of refreshing wines and beers are on the menu.

Soon after, guests will find their seats waiting at the brand-new Harambe Theatre, where dramatic lighting, breathtaking scenic pieces and projection exclusive to this production will transport them to the African savanna. “The Lion King Concert in the Wild” show brings the humor and heart of the story to life by blending excerpts from the Disney classic film with stage theatrics. Each week, a celebrity narrator backed by a live orchestra will join a company of singers and dancers to recreate the drama of an African story circle. The lineup of narrators will include Viola Davis, David Alan Grier, Joe Morton and other noteworthy actors.

The show begins with the iconic birth-of-Simba scene and continues through the gripping climax where guests will be immersed in Simba’s journey to find his place as the Lion King.  The guest narrator adds emotional perspective to the original tale inspired, in part, by African folklore and Shakespeare’s “Hamlet.”

As the show wraps, the fun continues in Harambe Village with the sounds of Afro-pop rhythms.  Dancers, costumed stilt-performers, puppets, popular characters from “The Lion King” and a DJ kick up the fun and encourage guests to participate in the street party.

The celebration will feature a culinary nod to Africa with multiple buffet stations of perfectly seasoned dishes for pairing with a selection of beers, wines and specialty beverages all included in the event admission.  Soft drinks and water also are offered.  Sweet bites of gourmet desserts under the stars and a special farewell experience will deliver a delicious ending to a magical evening.

Exclusive Lion King-themed merchandise and collectibles will be available to Harambe Nights guests.  A limited-release case for iPhones 4 and 5 designed by Disney Design Group artist Randy Noble will feature imagery from “The Lion King,” and a 20th anniversary “The Lion King” puzzle will be offered.   Other exclusive merchandise will include art and apparel.