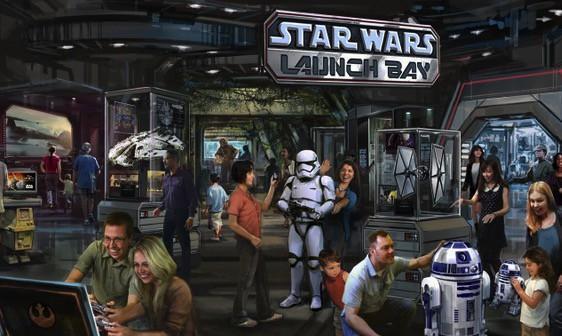 The Star Wars themed entertainment will includes new experiences as well as reimagined elements of popular Star Wars attractions at Disneys Hollywood Studios, which began on Dec. 1 – just ahead of the Dec.18 movie premiere of Star Wars: The Force Awakens. These new experiences involve the creation of Star Wars Launch Bay, a central locale for fans to celebrate all things Star Wars; Star Wars: Path of the Jedi, a cinematic overview of the Star Wars saga; and cool, new enhancements for Star Tours – The Adventures Continue and Jedi Training: Trials of the Temple.

Starting in 2016, including a fireworks show called “Symphony in the Stars: A Galactic Spectacular, will launch, as will a Star Wars-themed dessert party!

These new experiences celebrate the Star Wars saga at Walt Disney World Resort like never before, allowing guests, as well as Star Wars fans, the opportunity to transport themselves every day to a galaxy far, far away:

Star Wars Launch Bay
Located in Animation Courtyard, Star Wars Launch Bay is a primary location within the park for fans to celebrate all things Star Wars. In this multi-sensory space with an outdoor queue area lined with special concept artwork, guests can interact with beloved Star Wars characters, tour galleries featuring treasured memorabilia and replicas of large-scale Star Wars artifacts, including ones from Star Wars: The Force Awakens, and play the latest Star Wars interactive video games, plus have access to special Star Wars merchandise. 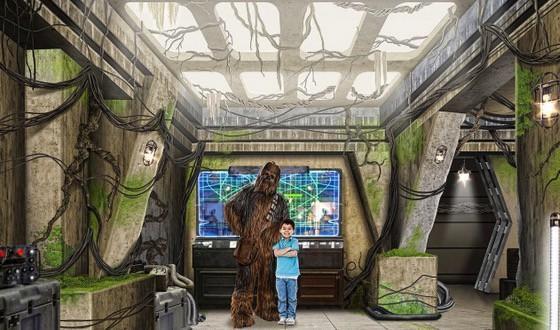 Star Wars: Path of The Jedi
Guests looking to relive the stories from the Star Wars saga or be introduced to the iconic characters, including ones from Star Wars: The Force Awakens, can watch an abridged, cinematic reel celebrating the Star Wars saga (episodes I-VII) in a theater setting near Echo Lake.

Star Tours – The Adventures Continue
Fans of this popular attraction will experience journeys involving new characters and adventures from Star Wars: The Force Awakens. Based on the Star Wars films, Star Tours takes guests to multiple Star Wars destinations where they interact with characters from throughout the saga. With an eye-popping digital presentation leveraging Dolby 3D to deliver a vivid and realistic experience, a dramatic musical score and motion simulator-based technology, guests are immersed in the Star Wars galaxy like never before on a theme park attraction. 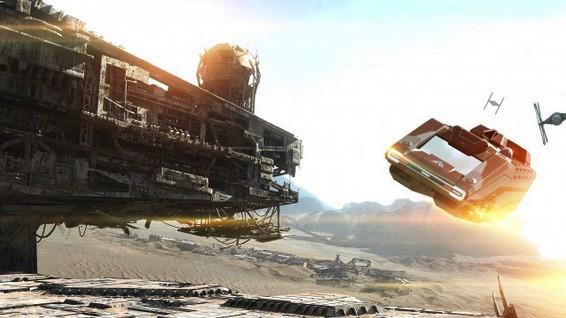 Jedi Training: Trials of the Temple
This popular entertainment offering has been reimagined with new characters and a new villain to battle from Star Wars Rebels. Younglings will be guided to the site of a secret and ancient Jedi temple where they will face villains such as Darth Vader and the Seventh Sister Inquisitor from the popular Disney XD series Star Wars Rebels, and discover if they have the makings of a true Jedi.

Stormtrooper Patrols
As guests enjoy the sights and attractions of Disneys Hollywood Studios, they may come face to face with First Order Stormtroopers who will patrol various areas of the park, interacting with guests during their mission to find members of the Resistance.

“Symphony in the Stars: A Galactic Spectacular
Starting Jan. 5, 2016, guests will be treated to a spectacular finish to their visit to the park involving a dazzling Star Wars-themed fireworks show set to memorable Star Wars music from throughout the saga.

Galactic Food
Guests also can experience Star Wars through their palates. Various novelty items and specialty foods inspired by a galaxy far, far away, such as Blue Milk Panna Cotta, Padawan Limeade, BB-8 Lemon and Butter Cream cupcake and a Han Solo Souvenir Kids Meal served in a Han Solo-themed bucket, are available at various locations inside Disneys Hollywood Studios. Guests will soon be able to purchase admission to a dessert party during the fireworks show featuring themed desserts, specialty drinks and a souvenir Chewbacca stein.