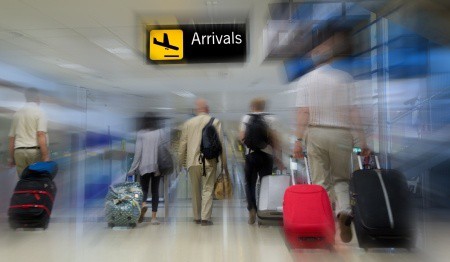 All around the world, everyone is gearing up for travel during the holidays. Some may brave the open road, but those pressed for time or traveling long distances may fly out to visit their loved ones for the end of year festivities. With busy roads, packed airports and crammed to the brim planes, tension can become a pretty common issue. Add in some of the “most annoying” fellow fliers, and the stress can be downright palpable on a plane.

“Planes are flying full, and the holiday season is traditionally hectic, so in-flight etiquette is at a premium,” John Morrey, vice president and general manager of Expedia.com said in a recent press release.

So which flying offences bother fellow fliers the most? Northstar surveyed 1,001 adult Americans and ranked their responses in a recent study to find out.

Inattentive, talkative, smelly, and drunk passengers weren’t the only ones to make the list though. Ten percent of all passengers surveyed admitted to “being intimate” with someone on a plane. These folks made #15 on the most annoying fellow passengers. Those that seem to forget that not everyone wants to hear the movie, AKA, the “Audio Insensitive” made #6.

“Seat-back Guy,” or the person who reclines their seat as soon as they’re allowed and keeps it that way, made #7. However, 80% of all Americans admitted to reclining their seats while flying. About 17% of all passengers admitted that they would recline their seats, even if the passenger behind them was noticeably pregnant while 23% would do so if the passenger behind them was elderly. Forty-five percent of them would do so without warning, while 22% would give a warning but not ask permission.

Other interesting findings from the study included:

Interestingly enough, Americans say that they feel warmly about their fellow passengers, and 84% agreed with the statement, “For the most part, fellow flight passengers are considerate of other passengers.”

Maybe it’s the holiday cheer, or maybe it’s because we’ve been guilty of at least one infraction (if not more) at one time or another. Either way, it’s nice to know that we can all figure out a way to fly peacefully, even if we are a little edgy from all the traffic and congestion.

In closing, we’ll leave you with this last statement from John Morrey:

“Most of us, when we look at the list of offending behaviors, can admit to having committed one or more of the violations. So this season, perhaps we can all take care to be as friendly and accommodating to our fellow passengers as possible. After all, we’re quite literally all in this together.”