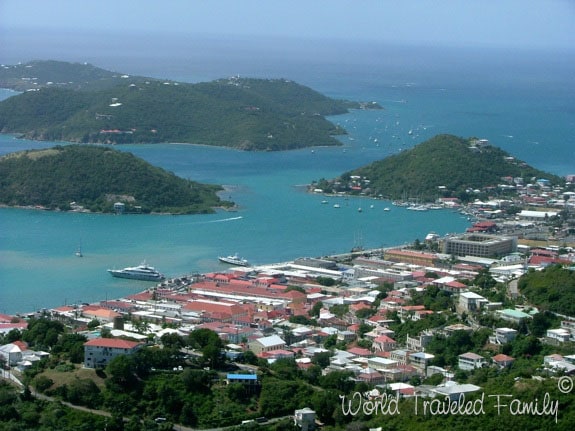 Located 40 miles east of San Juan,  St. Thomas is 32 square miles (13 miles long and 4 miles wide), with a population of about 52,000 people. The US Virgin Islands(50 in total) have flown many flags in their time.  They were at one time controlled by Spain, England, France, Holland and Denmark, before being purchased in 1917 by the United States for 17 million dollars. Residents are not, however, protected by the U.S. Constitution, do not vote in Presidential Elections and have no vote in Congress. 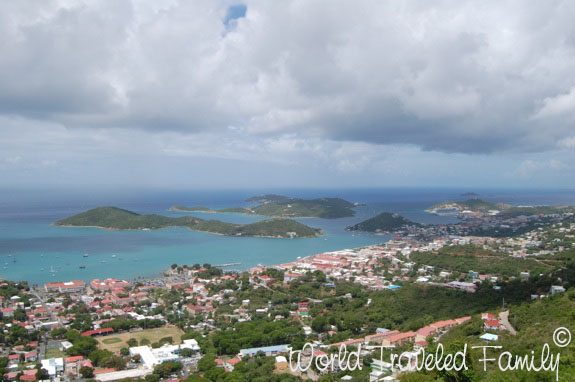 For years St. Thomas only had one Cruise Ship pier, the West Indian Company Dock (WICO) in Havensight and it was cool to see all the ships that were in port as they lined up one behind the other.  The popularity of the island paired with the introduction of Mega ships created the need for a second pier and in 2007 Crown Bay opened on the other side of town.

The first time we docked in St. Thomas I was struck by the lush landscape that was sprinkled with houses and buildings.   Literally love at first sight, it is one of my favorite islands because it has changed very little in the last 17 years. 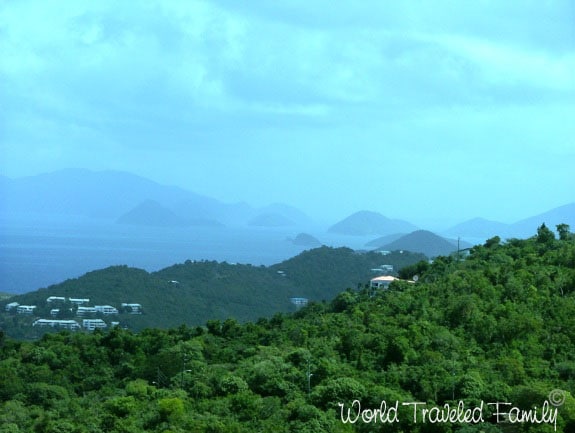 Before you hit the beach or open your wallet, there are a few places in St. Thomas you should consider visiting.

Paradise point, which is located close to the West Indian Company Dock is a nice perch to take in the beauty of this island. You can ride to the top in a gondola or make the trip up in a car.Don’t forget your camera because the view is beautiful and you will get some nice shots of the island from the top.  (Adults – $21, children (ages 6-12) – $10.50, ages 5 and under – free)

If you chose to do an island tour you will likely stop at Mountain Top. Located on the opposite side of the bay from Paradise point, you can get a nice side shot of the cruise ships lined up at the WICO pier, while enjoying one of their famous banana Daquiris.  There is some shopping & free wifi so you can share your gorgeous view with friends at home! 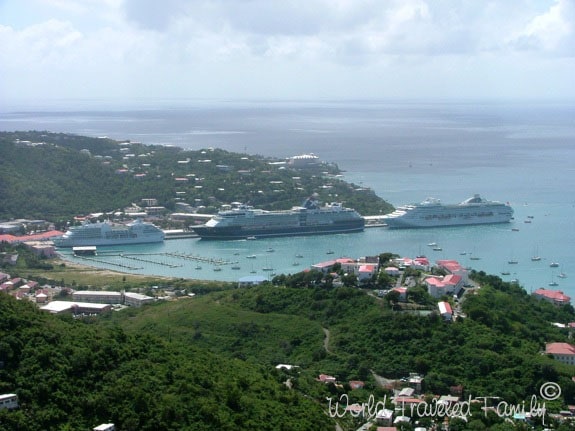 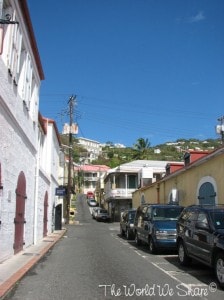 The shopping in St. Thomas is second to none in the Caribbean.  In town you will find a good mix of shops that sell perfume, souvenirs, liquer and electronics, along with a vast number of jewelry shops.  Actually its staggering the number of gold and diamond stores there are on Main Street in Charlotte Amalie.  If you aren’t in the market for a new ring or bracelet you will find lots of other items to bring home.  Beach covers, straw hats, wood carvings – they sell everything.

Note: If you are visiting St. Thomas on a Sunday the shops (and many attractions) in downtown Charlotte Amalie are open only from 9 a.m. until 1 p.m

In most of the literature that you read about St. Thomas the beach that will be mentioned the most is Megan’s Bay.  At some point it was named one of the top 10 beaches in the world and someone photocopied it and made it law that every vacationer that visited the island should go there.  Don’t get me wrong, Megan’s Bay is pretty, but it is also normally packed with tourists all day long.  There is a fee ($4 pp, $2 for locals) to get in, but the water is normally quite calm, which makes it perfect for families.  The men will like that there are beach side waitresses that are dressed in bikinis to bring them drinks all day long.  Also famous at Megan’s Bay are the Pina Coladas.  I was a bartender for many, many years and couldn’t taste a hint of alcohol in mine – it was that smooth.  They are good, but at $9 each they are also expensive.  The water is pretty on a sunny day and the cove that the beach sits in is shaped like a heart, which the locals like to point out.  From the Crown Bay ship pier it is $9pp to get to Magens Bay. 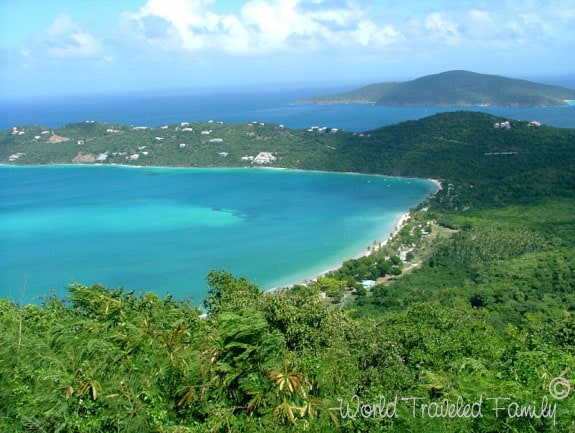 A couple years ago, on the recommendation of a friend who had worked on a cruise ship, we visited Coki Beach for the first time while in St. Thomas.  Located in the East End of the island this beach is smaller than Megan’s but crystal clear and right beside Coral World.  We liked this beach both times we visited but found it highly populated with locals who don’t always get along.  While we were climbing the stairs from the beach to Coral World there were a lot of locals sitting on the rails in front of the shops arguing with each other.  We found the same situation when we were waiting across the street for our taxi to return.  It is a shame because this beach is pretty and Coral World is a cute spot for the kids to get up close with stingrays, nurse sharks, lorikeets and huge iguanas. 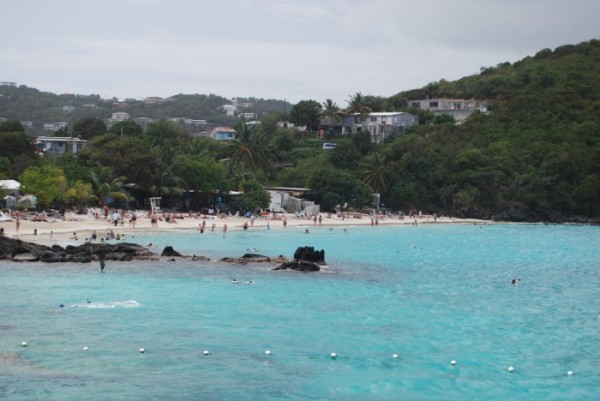 While looking to see more of St. Thomas we were recommended Sapphire Beach.  A little remote, I have a special place in my heart for this beach as it is where I was engaged. At that time there was a small restaurant to get some snacks at if you were visiting.  I have read online that this establishment has since closed, leaving the beach without amenities for those visiting for the day on cruise ships.  The beach itself is nice and calm and it is positioned directly in front of the Crystal Cove Beach Resort.

St. Thomas is just a short ferry ride from fellow U.S. Virgin Island, St. John.   The Charlotte Amalie Ferry, which is 45 minutes each way, will cost you $12 per trip.  When you get off the ferry there are taxi drivers waiting to take you around the island.  My parents visited Cinnamon Bay during a recent to St. John and practically had the whole thing to themselves.  The trip was $8 pp per way and was about 15 minutes from Cruz Bay where the ferry docks.  Cinnamon Bay is pretty but there aren’t any amenities so if you are looking for a bar or restaurant the popular Trunk Bay may be a better choice.

Every year the U.S. Virgin Islands host about 2 million visitors, many of whom visit on cruise ships.

When you visit, the sky is the limit as to what you can do for fun!  Whether you are snorkeling from land or on a catamaran, touring the island or just exploring on foot, there is so much to see and do for all vacationers.