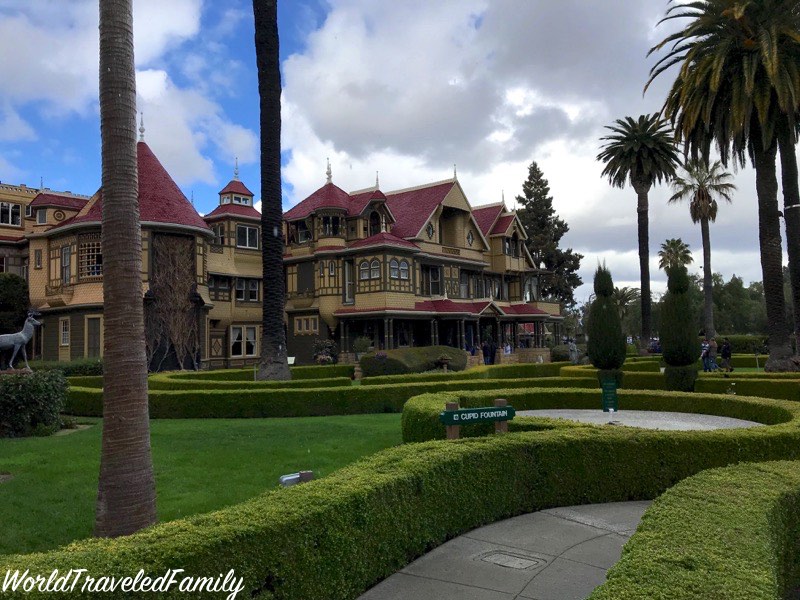 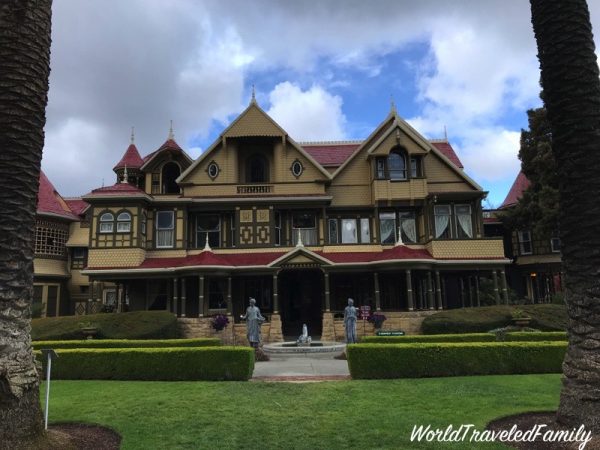 In 1884 the home was purchased as an unfinished 8 room farmhouse, but for the next 38 years, Mrs. Winchester would continue to add on to it. When she passed away in 1922 the home had grown to 160 rooms – 110 of which are tourable if you visit.

I had heard many stories about this home so while in San Jose recently we stopped by to see if it was as creepy as it’s been portrayed. 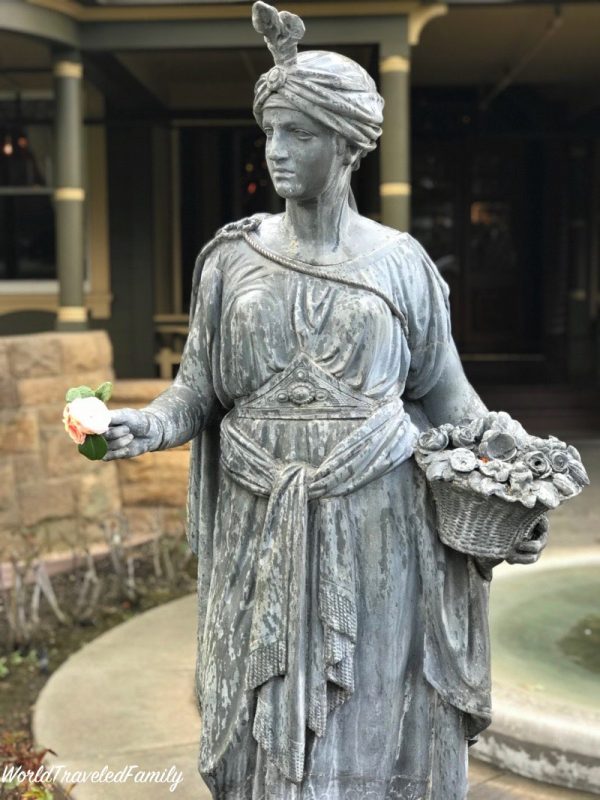 I have an obsession with historical mansions so seeing this house in its glory made me so happy.   There is no denying it IS a ‘tourist trap’ especially after the movie but the inside is truly incredible – even if it’s not furnished with her original belongings.

We were unable to take photos inside the home.  Previously, you were allowed to but our guide told us tours would take too long because visitors were lagging behind taking pictures.  Also having images online ruined the element of surprise for those who had never visited the home. 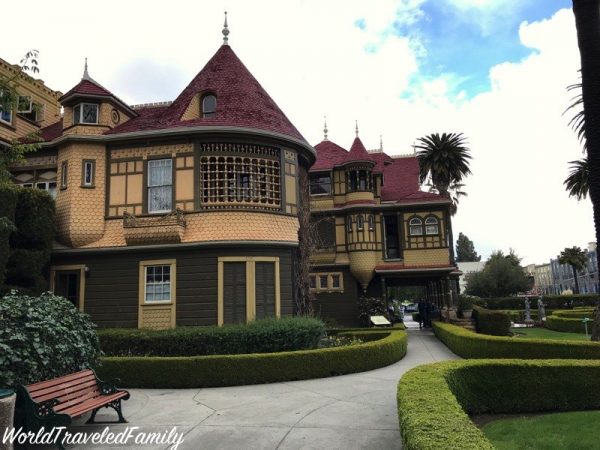 Before arriving we tried to book a tour online and the website said they were fully booked. We were, however, able to walk up to the ticket counter and get 2 spots on the 11:30 tour so if you can’t get tickets online stop by and there will likely be room.

On the flip side – if you purchased online tickets you don’t have to wait in line outside.

After losing her husband and daughter to illnesses, Sarah Winchester sought a medium who revealed her family and fortune were haunted by those who were killed by Winchester rifles. She was instructed to move West to get away from the spirits and build a great house for them. This led her to Santa Clara where she bought a property that eventually grew to 160 acres. 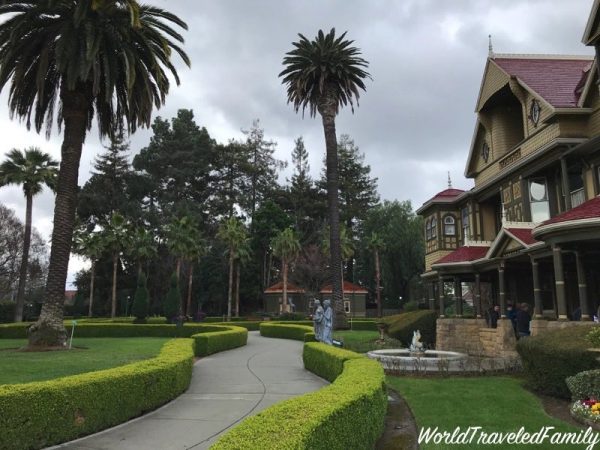 In documentaries and TV shows the home is billed as bizarre with stairways that lead to the ceiling, winding hallways and doors that open to nowhere.  This is all true but much of the design of the house actually makes sense…

Just 4’10”, Sarah had arthritis and was unable to climb regular stairs.  In order for her to be able to access all of the floors of the mansion, the staircases were modified with riser stairs that were long and just two inches in height.  Kind of like a ramp they are very narrow(she was small).  These stairs meander likely in order to accommodate the tiny space they had to be put in.  In some cases, there are regular stairs(for the staff) and riser stairs side by side. Essentially the house was modified for her disability.

She was unable to get into a bathtub so she had one of the first showers complete with duo sprayers to she could be cleaned on both sides at the same time.  This was pretty unique for the time – especially considering she had a water heater in the room to supply warm water to her shower.

Sarah did have a fascination for the number 13 and it appears in almost every room.  There are 13 panels on the wall, 13 windows in the room, 13 engraved on the door hinges, 13 bathrooms in the house, 13 stairs on many stairways, 13 holes in the sink drains, and 13 hooks in her seance room.   The number’s prominence can be seen everywhere.

And yes, there is a seance room.  It is the most centered room in the house and it had a secret passage where she could exit out the back of.  Each night she would have a seance where she would get help with her building plans.  Here Sarah would sketch ideas for her latest house designs and would meet with her foreman in the morning to go over new changes.

Despite the fact that there are 160 rooms in the house it is estimated that 500-600 rooms were built and remodeled.  Construction didn’t stop in the 36 years Sarah lived at the mansion.

When she passed away the home contained more than:

As you tour the home the guide tells stories about Sarah and her inspirations behind each room.  Oddly, there wasn’t one time where I thought the house was ridiculous.  When you’re there almost everything makes sense.  In fact, many of the home’s features were innovative for their time.

The carbide gas lights were powered by the estate’s gas manufacturing plant.  They were activated by an electric button which was a new process.  The porcelain sinks in the kitchen were created with molded soap holders and washboards to make work easier for her staff.  Sarah also had brass corner plates installed in the every stair corner to make dusting the corners easier.  They also look incredibly fancy.

Each room has a call system where a card would drop showing the servant where she was in the home.

The North Conservatory has a zinc floor so the staff could mass water plants in the room.  The floor itself is built on an angle so all the water could run down and water the garden below. When not in use a wooden floor rested over top to have a more luxurious appearance. 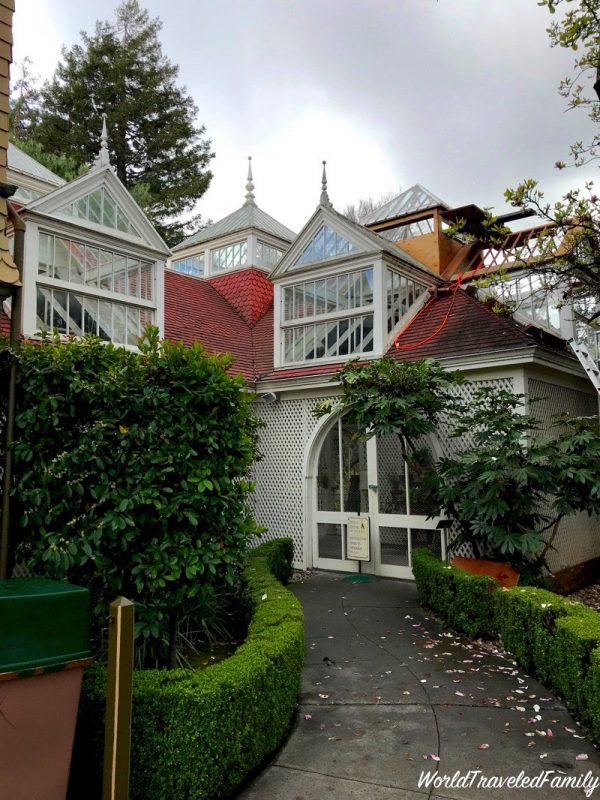 The home has two conservatories.  The floor in the South Conservatory famously has a window in the floor.  Odd at first but when you pass over it, you can see it brings more light into the room and also allowed Sarah to be able to watch over her staff below as they worked.  Many of the designs she had were for her personal convenience and don’t follow normal design protocol so they were deemed as weird.

The home also had a wine cellar but it has never been found.  Sarah reportedly went down one evening to get some wine and found a dirty handprint on the wall.  Taking that as an omen she had it boarded up to be lost forever.

One of the most spectacular parts of the home is the woodwork.  Ornate doorways, hall wainscotting, cupboards and parquet floors were handcrafted by workers who laid and re-laid the floors in mahogany, rosewood, teak, maple, oak and white ash.

The floors in the front room reportedly took a year to be installed.  Sadly, they weren’t enjoyed by many.  Sarah was a recluse and rarely had visitors over.  It has been said she kept her face covered by a veil at all times and she would fire servants he saw her without it.

There is only one photo in existence of her on the property and it was taken by a gardener who hid in the bushes.

We were allowed to take photos of the living room area and you can see the wood strapping on the ceiling and panels on the wall. 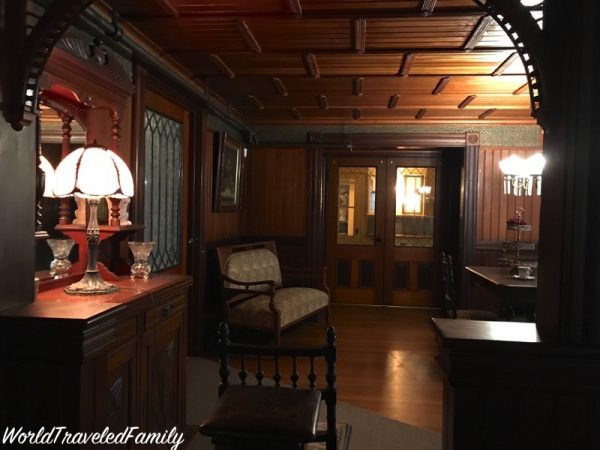 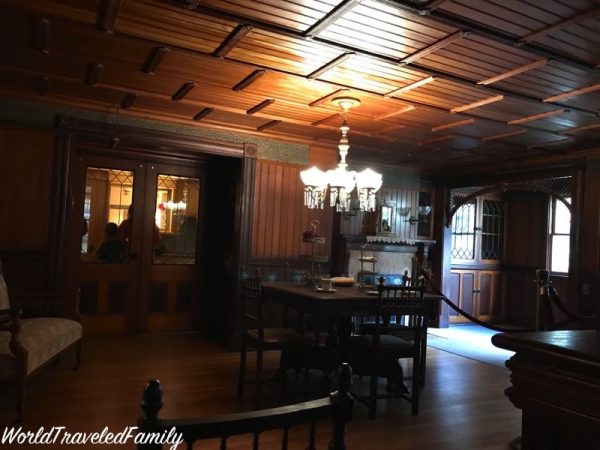 As your tour concludes you are guided back to the gift shop and small museum area.  The gift shop has many Winchester themed items you can purchase and a small restaurant you can order food from. 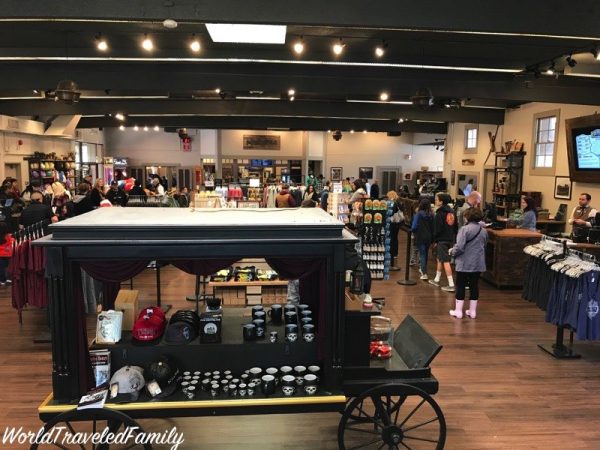 The museum has some interesting pieces in it some of the first Winchester rifles, and some of the products the company made after demand for firearms was reduced. 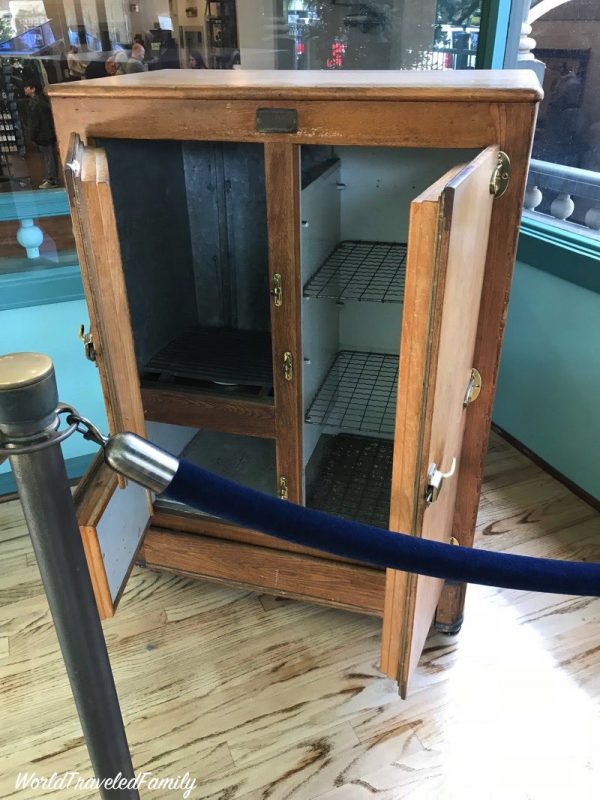 A slot machine caught my eye.  I’m not sure if it belonged in the house or it was a product they made. 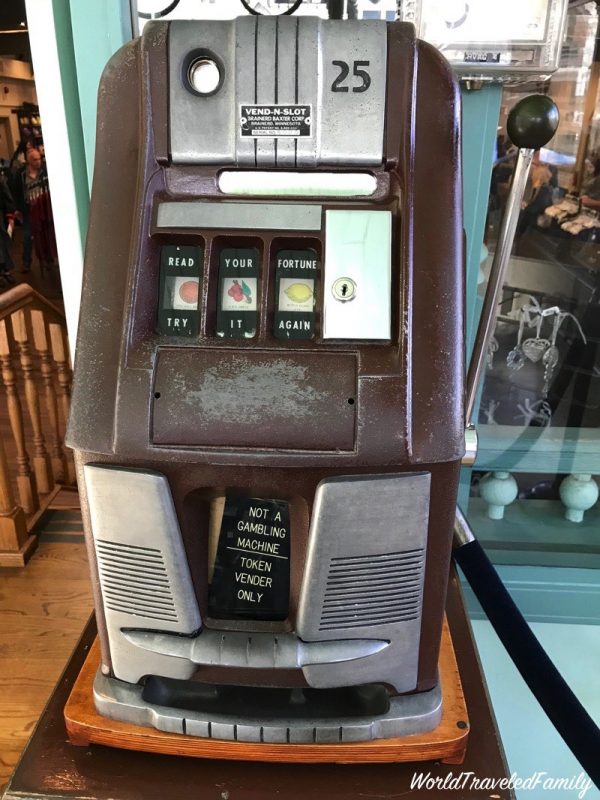 If you are in the San Jose area I highly recommend a visit to the Winchester Mystery House.  The grounds are absolutely beautiful and the home is enchanting.  The tour takes about 60 minutes so plan to spend a couple hours at the property.  There is free parking in the lot adjacent to the home.