They call it Death Valley for a reason.   It’s an extreme environment; one of the few places in the US where nature will actually try to kill you.  It is the hottest and driest place in North America and nearly the world.  But, don’t let that put you off.  It’s the extremes of the place that make it an Awesome Destination.  It’s a challenge and it’s a point of pride to say you’ve been.

Death Valley is on a lot of bucket lists.  I know this because every time my husband wears his Death Valley t-shirt, he is approached by people asking, “Have you been there?”  “What was it like?”  “I’ve always wanted to go.” 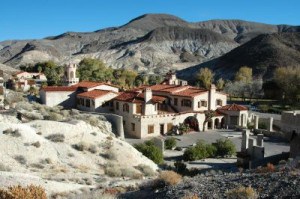 My husband is a, not particularly closeted, weather enthusiast, and environmental extremes are his raison d’être.  So naturally we traveled to Death Valley with our two-year-old son.

It may seem nutty to take children on a vacation to such a severe place, but if Death Valley is a place you’re excited to see, your enthusiasm will spill over to your kids and an amazing adventure will be had by all.

We planned our trip, into the valley, during the ‘dog days’ of summer.  What would have been the point in seeing the second hottest place on Earth if it wasn’t searing hot?  The temperature hit a shocking 116°F (47°C).

We stayed right in the middle of the park, at a beautiful oasis called Furnace Creek Ranch.  We lucked out and nabbed one of the semi-detached cottages in the older section.  It was like a quaint little neighbourhood.

The ranch is decked out with plenty of amenities.  It has a store, a couple of nice restaurants, a museum and air-conditioning galore.  They have a swimming pool, but it isn’t particularly refreshing.  It’s spring-fed; to keep it cooler than it would be if it was baking in full sun all day, but it still does very little to cool swimmers down.  Nevertheless, it was interesting to try it out. 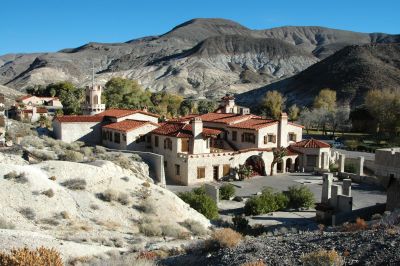 There are a few other anomalies to get used to when you’re staying in the dessert.  First, there is no such thing as cold water.  Turn on the cold water tap, run it as long as you like, and it will never cool down.  I brushed my teeth with a hot toothbrush; it was weird.

During the day, the sun is so blazing hot; the playground equipment is too scorching to use.  There are actually signs posted in the playground, at the ranch, warning parents to keep their kids off the equipment during the afternoon.  Our son got to play in the evening, after the sun went down.

Young children shouldn’t be exerting themselves at all, in temperatures like that.  They can over heat pretty quickly.  We had a bit of a scare with our little guy shortly after we arrived in the valley.  He had been too active, in the heat, and had started looking ill, like he might faint.  After that, we had him sitting in a stroller, holding a cold bottle of water, anytime we were outside, during the day. 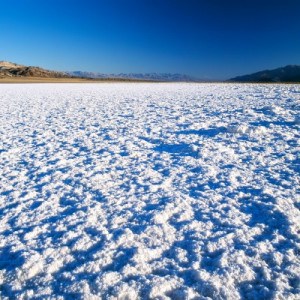 There are a number of beautiful places to investigate in Death Valley National Park, but the most popular stop is a place called Badwater.  It is the hottest and lowest point in the park at 282 feet below sea level.  There is a small pool of very saline water and then a massive salt flat that stretches out for miles.  I don’t normally eat off the ground, but in this case, I was inspired to eat the ground itself; or to taste it at least.  It was salty – go figure.

Death Valley is an extreme place, and you have to take precautions, especially during the summer months.  Always follow the advice and guidelines handed down by park officials.

It’s a lonely place, in a way.  There are few other motorists on the roads, there are no plants and the animals are hard to spot.  The highway is just a string of warning signs.  But, the trip is an honest, mind-broadening adventure.  It’s a journey that will be remembered by anyone who dares to take it.  Death Valley is a truly awesome destination, and one you should see with your kids. – Jen R, Staff Writer