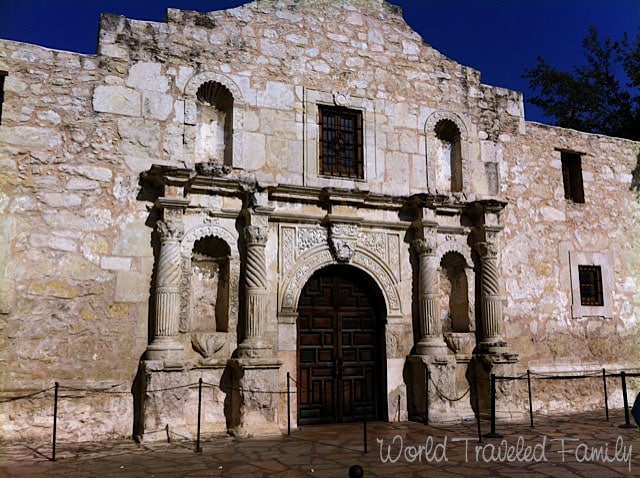 Visiting The Alamo in San Antonio

While in San Antonio for a media event last week I had some time off to explore on the first day and headed straight to the Alamo. Just a 5 minute walk from my hotel, this former Mission has been kept in good condition and is a must visit for anyone visiting the area. 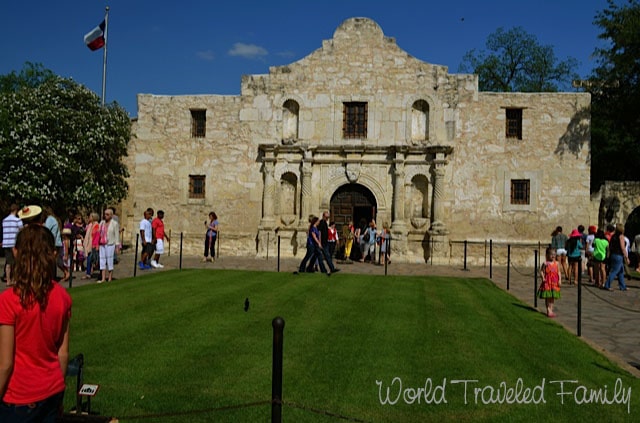 Built in 1724, the historical significance of this site is apparent with every step you take around the grounds. And while the main buildings are incredible, the one thing that struck me as paramount was the wall that surrounded the property. 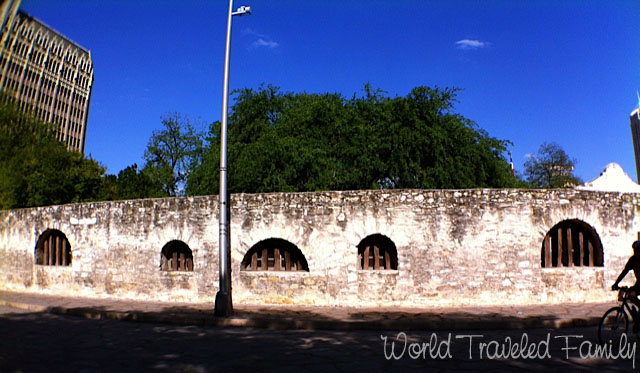 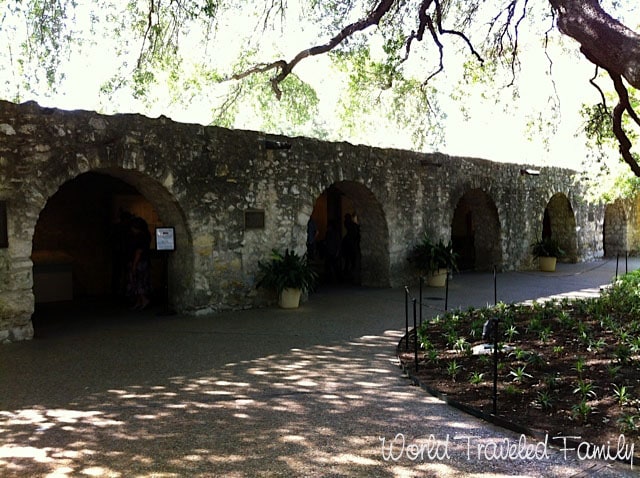 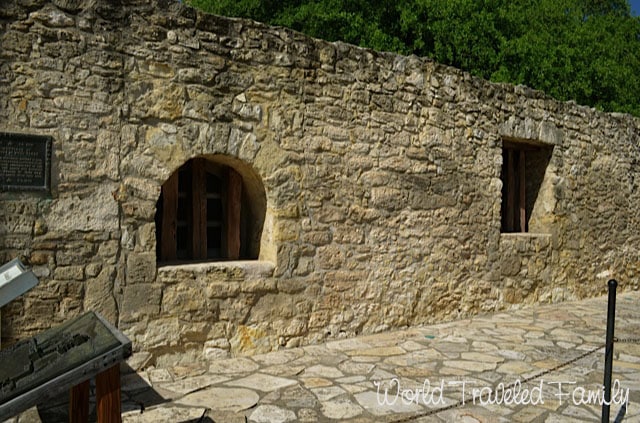 Significantly reduced over the years, the thick stone wall, which is known as the long barracks was used as Spanish army barrack and hospital, later it was a fortress, a United States Army quartermaster depot, a general store, and in 1905 became a shrine and museum.  It was once two floors but the second floor was removed in 1913 in an effort to remove the “unoriginal” portions of the building, leaving only the walls standing.

Below is an image with the second floor attached when it was known as the Hugo and Schmeltzer Building. I found this image of it at WilkinsonRanch. 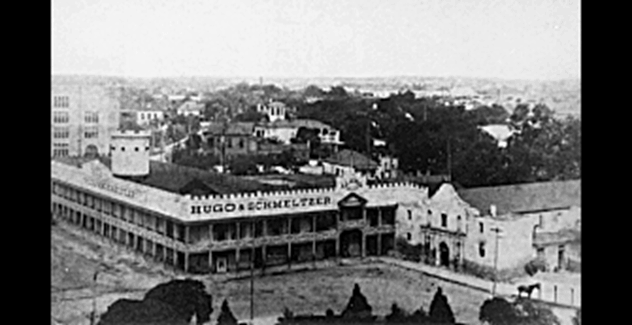 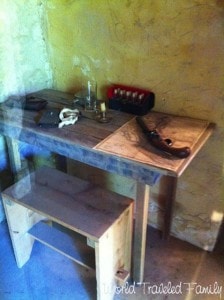 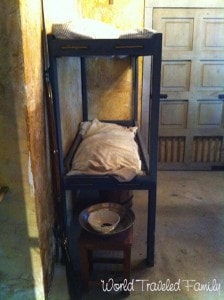 The mission complex once covered up to four acres of ground and contained not only the church, but also the convento, or priests’ quarters; a granary; workrooms; storerooms; and Indian housing, all surrounded by an outer wall. 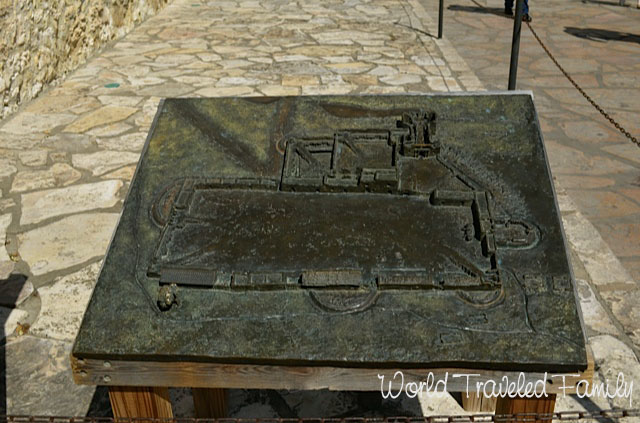 A monument outside shows the size of the original mission.

Note that the chapel is at the top right.  The two boxes to the left of the chapel still exist(partially), but the huge outer wall no longer exists.  In 1836 the Mexicans knocked down some of the outer walls of the compound. 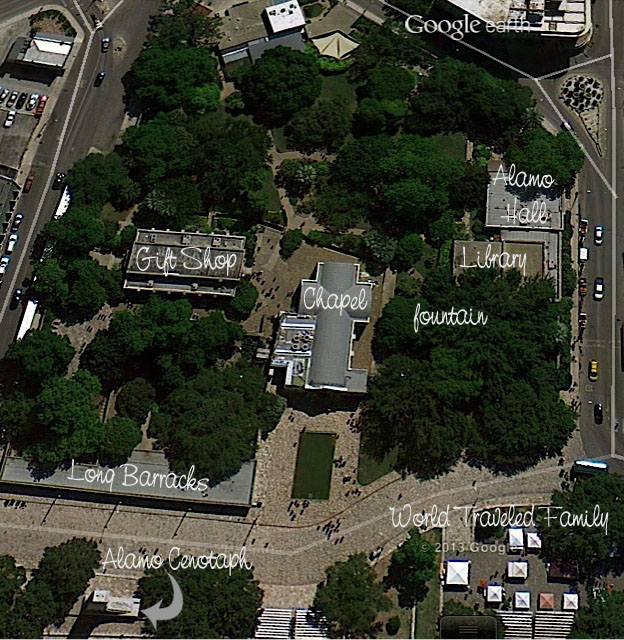 The chapel of the Alamo Mission(Mission San Antonio de Valero) is the undoubtedly the most famous part of the site.  Inside it is lined with cases containing artifacts from the Battle of Texas.  Weapons, maps, news articles and many treasures can be found in the chapel and also in the long barracks and gift shop.  Also on display is William Barret Travis’ Ring.

Travis gave his ring to the safekeeping of Susanna Dickenson in hopes she could get it to his son. Though it never made it to the son, it was well cared for and respected and finally made its way back to The Alamo 109 years later.

The main chapel, now standing, is 75 feet long by 62 feet wide. The walls are of solid limestone, 3.5 feet  by 22 1/2 feet high. This structure was roofless at the time of the siege.

The Texas Almanac notes that ‘the Alamo changed hands at least 16 times among Spanish, Mexican, Texan, Union and Confederate forces between 1810 and the end of the Civil War. During the early 1840s, stones from the Alamo were hauled away by scavengers.’

In 1850 the U.S. Army began repairs and added a gabled roof (the first time the church had a complete roof) and the “hump” to the facade. 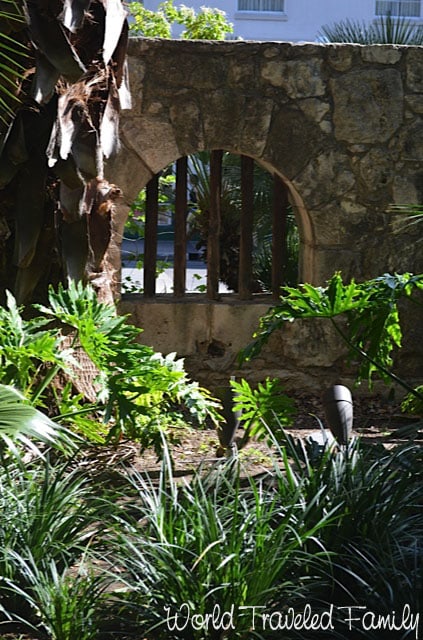 Also on the site is the Daughters of the Republic of Texas Library. Because I visited on a Sunday, I wasn’t able to go inside and look around. The building the library is housed in was built in 1950. The Daughters of the Republic of Texas have collected an extensive anthology of Texian history.  In fact, many of the pieces in the reference center have been donated by families in the area. 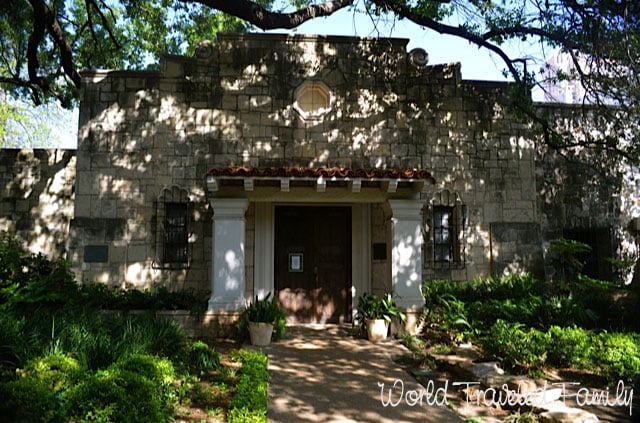 Across the street there is also a memorial, The Alamo Cenotaph, that was erected in Memory of the Heroes who sacrificed their lives at the Alamo, March 6, 1836 in the defense of Texas. 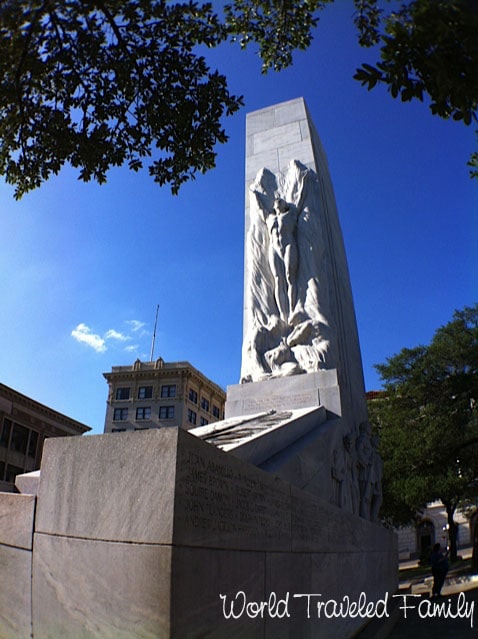 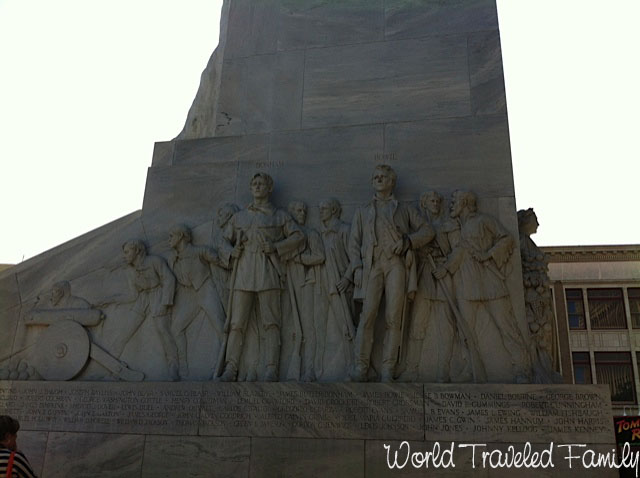 Seen on the sides of the Cenotaph are carvings of the Alamo defenders, including depictions of William B. Travis, Jim Bowie, David Crockett and James B. Bonham. The monument also bears the names of men who died at the Alamo and this inscription,

“They chose never to surrender nor retreat, these brave hearts with flag still proudly waving perished in the flames of immortality that their high sacrifice might lead to the founding on this Texas.”

If you are planning to visit the Alamo leave your self a couple hours to look through the buildings and the artifacts. It is open daily from 9:00am – 5:30 M-Sat, 10:00am- 5:30 on Sunday and there is no fee, but donations are always welcome.

There is not photographing allowed in the museum buildings.