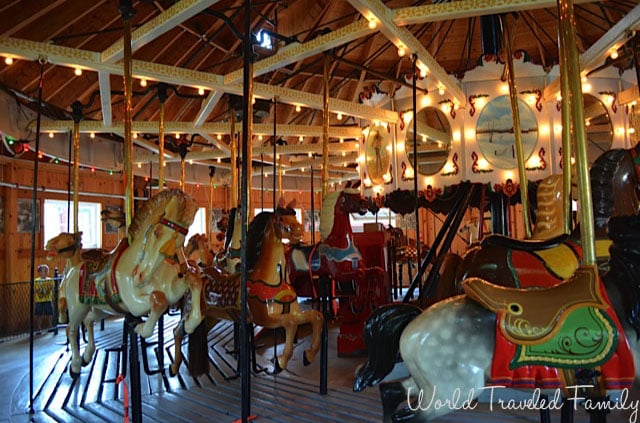 Located in North Tonawanda, the Herschell Carrousel Factory Museum is a fun place to stop to learn about how carnival rides were created years ago. This is not a huge museum, but it is filled with interesting pieces from the late 1800s and early 1900s. Admission is just $6 for adults, $5 for seniors, $3 for children ages 2 – 16 and that includes a token to ride one of the museum’s two carousels. (additional rides are just .50!) 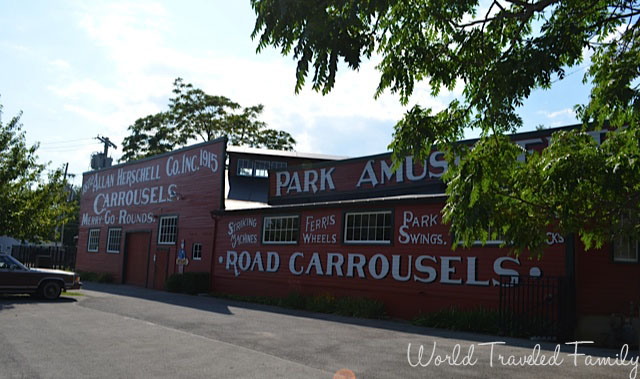 What started out as a boiler and steam engine company, turned into a amusement empire after Allan Herchell spotted a carousel in New York City that was powered by a steam engine.  Over the years the Allan Herschell company produced over 3,000 hand carved wooden carousels.

Situated in the original Herschell factory, visitors to the museum can view how the master carvers created the horses and carriages, where they painted them and how they were assembled. 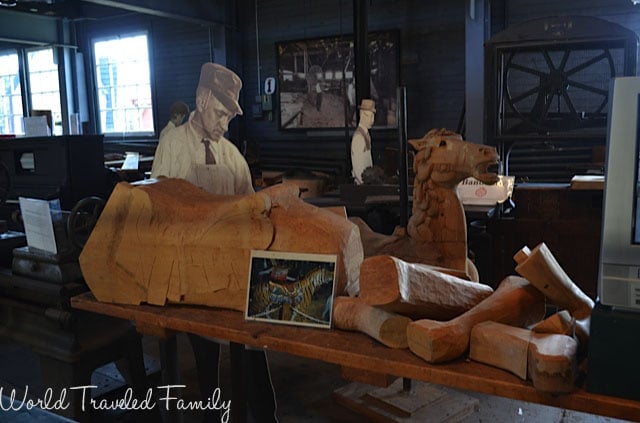 You can also see how the Wurlizter roll was made and how it worked when placed inside an organ. My oldest son loves music of all genres of music and it was very kind of one of the museum staffers to sit with both of my children and show them exactly how the 1895 parlor organ they have on display worked. It was one of the highlights of their tour. 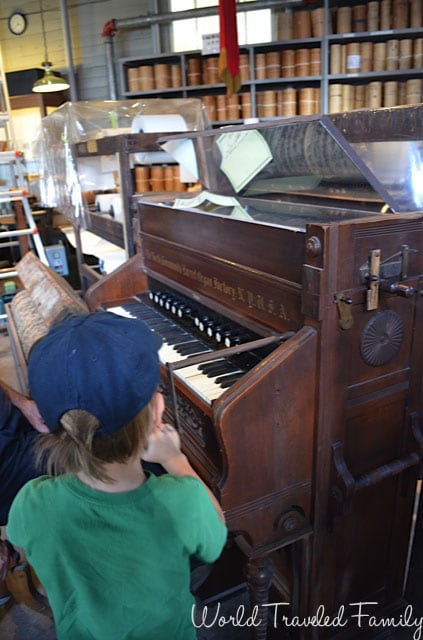 Between the area that houses the carousels there is a room that showcases a variety of animals from some of Herschell’s famous rides.  Here you can see some of their vintage livestock and learn a little more about the evolution of their design. 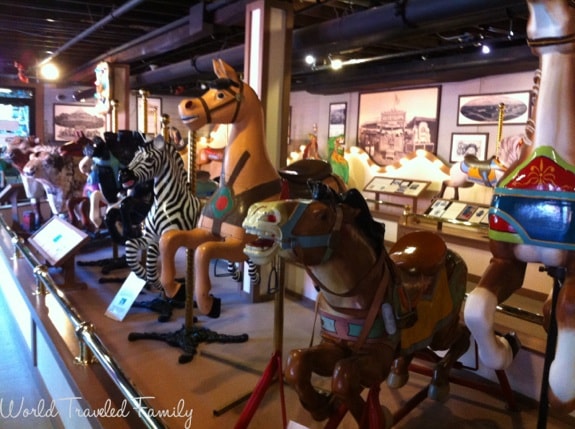 This 1912 ride on horse on display was donated by the Flick family. The horse, which was likely destined to be placed on a carrousel, was involved in a train wreck and was sold by the Herschell company in the community shortly after. A cousin made the stand for the horse and turned it into a ride for the Flick children. It was a family treasure for years before being gifted to the museum in 1990. 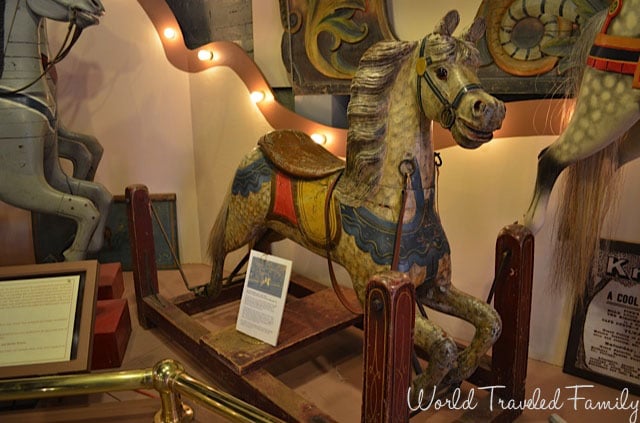 Early carrousels were not created for children.  The children’s carrousel on display at the museum was built in the late 1930’s.   The horses are tiny, which would allow little ones to be able to ride on their own.   It’s popularity spurred the company to create more rides for younger riders. 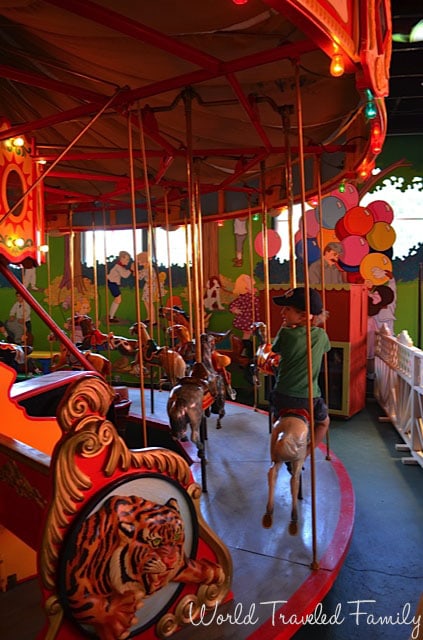 Under the ownership of John Wendler and his family, the Allan Herschell company also made some amusement rides in the 1930’s.  The Little Dipper was one of the rides at Crystal Beach Park in Erie Canada.  When the park closed down in 1990 the Herschell company bought back the tiny coaster and reconditioned it for display. 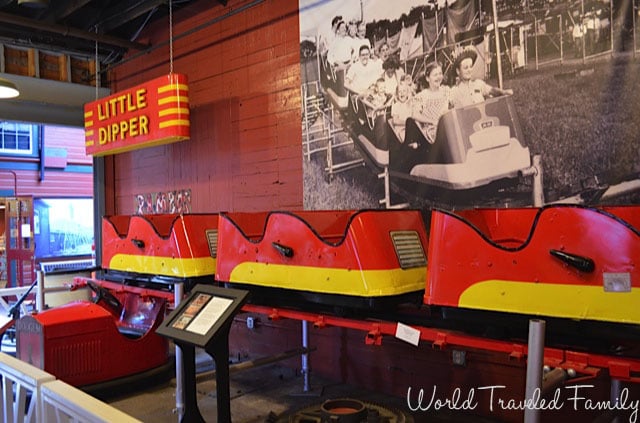 The #1 Special Carousel was built in t 1916 and was originally located in London, Ontario at Springbank Amusement Park, before being moved to Hamilton’s Burlington Beach in the 1940’s.  It was found in storage in the 80s and purchased for display at the museum.  This carousel has is a 3 row design with 36 Jumping Horses, 1 chariot, 1 Tub.

My youngest son rode one of the beautiful horses, while my oldest opted to ride in the spinning tub.  He was a little dizzy after his ride and told me he would just rather go up and down next time. 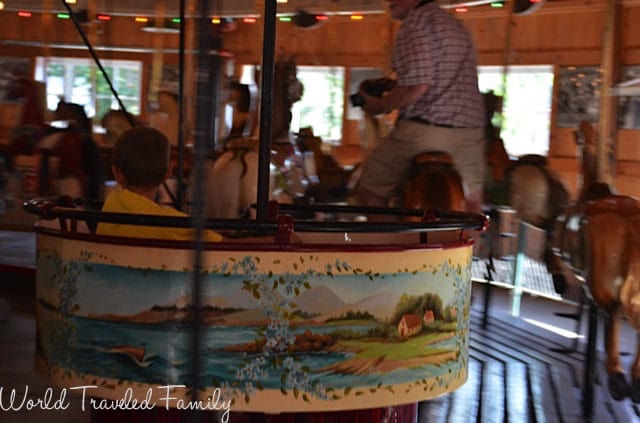 My kids thoroughly enjoyed our visit to the Carousel museum.  It is very interesting to see how the Allan Herschell Company influenced the early design of how amusement rides are created today.  Seventy years ago they were integral in pioneering ‘such concepts as “Kiddieland,” a specialized group of rides designed for small children’. They also introduced adult thrill rides such as the Twister, the Hurricane, and the Sky Wheel, a double Ferris wheel nearly 90 feet tall.

Outside we could see people working on what appears to be an area with 5 or 6 new rides.  The Pamphlet we received says that Kiddieland will be opening up in 2013 so look for that in the future!

If you are interested Carousel.org has a large listing of some of the vintage carousels that are still in operation today.

I spied three Herschell- Spillman steam carousels from 1894,  1901 and 1904 all with jumping horses as opposed to ones that go up and down.  All are still in operation!