World Traveled FamilyLife Is An Adventure - Explore it Together!
HomeTips 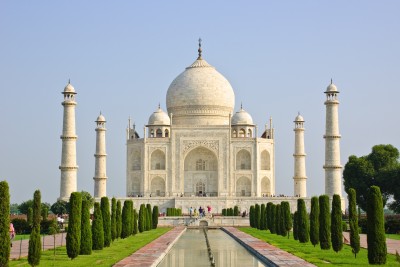 When you see the Taj Mahal for the first time, there is an immediate sense of awe that grips you. Because you might have seen a hundred pictures of the monument, but the digital image somehow fails to capture the beauty of the real thing in its grand 3D avatar.

My family and I decided to visit the Taj Mahal in Agra over a long weekend. But what could have been a mere 4 hour drive, turned out to be a punishing 7 hour journey with traffic jams stalling our movement every few miles. We had simply overlooked the fact that like us, many families had chosen exactly the same weekend for the trip!

By the time we reached Agra, it was already 4.00 in the evening and we had lost all hopes of witnessing any of the glories of this enchanting Mughal era city in those dusky hours.

The Mughal Empire ruled India for thousands of years and unlike other invaders who planned to loot the treasures of the country, the Mughals made this foreign land their own. They successfully combined their Muslim traditions, art and culture with the prevalent Hindu dominant population and thus laid the foundation of the multicultural integrity called India.

The Mughals were also very generous to give India some of its greatest architectural marvels like the Red Fort in Delhi and Agra, the Fatehpur Sikri fort and palace, and of course the cynosure of all eyes, one of the eight wonders of the world – The Taj Mahal.

Quite sure that we would have to wait till the next morning for our encounter with the fabled white marble mausoleum, we decided to go for an evening stroll. It was then that a tonga driver saved the day.

Agra still has many erstwhile tonga (horse ridden carriages) running through its streets. When one old man approached us, we knew it would be fun and so hopped in enthusiastically. “Should I take you to the Taj Mahal?” the old man asked. Puzzled, my husband in turn questioned him, “Is it not approaching closing time?” The man replied assuredly, “Oh no! The monument closes at 7.00. It is in the winter that it closes at 5.00.”

He didn’t need to wait for a reply. The horse seemed to understand our excitement too as it galloped through the narrow lanes and brought us within minutes to the main entrance. 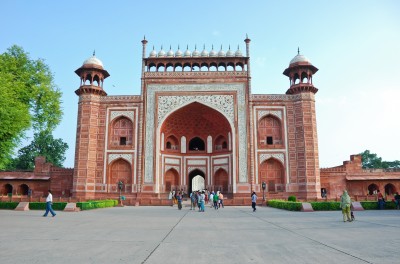 The Taj Mahal was built by the Mughal Emperor Shah Jahan in memory of his wife Mumtaz Mahal who died in 1631. Its perfect proportions and exquisite craftsmanship have been described as ‘a vision, a dream, a poem, a wonder’. In that era, it cost the emperor nearly 41 million rupees (approx. 8.5 million USD) and 500 kilos of gold. About 20,000 workers worked for 22 years to complete this ode to love.

From the end of the gateway to the central tomb are the famous mughal gardens. It is as much the beauty of the symmetrically aligned fountains, pools and the trees that make the heart sing praises of the yesteryear artists as the main tomb whose impressive figure seems to reach for the sky with each approaching step.

We were concerned though of yet another natural element that could derail our visit. Rain clouds were hovering above the Taj and the cool breeze was indication enough that showers were not far behind. But instead of spoiling our trip, the darkening skies gave a perfect picture opportunity with the Taj rising like a white diamond in the dark backdrop.

Taking cover from the light drizzle we ran up the steps inside the main Taj structure and were immediately mesmerized. While from a distance Taj Mahal looks immensely beautiful and grand, on closer inspection you realize that the overall beauty is actually a combination of many finer elements that have been each carved to perfection.

There is for example the white marble screen daintily carved from a single block of marble and which was meant to veil the area around the royal tombs. In the centre there is the Emperor and his beloved wife’s cenotaph on a platform. The actual graves though lie is a dark crypt below, closed to the public. 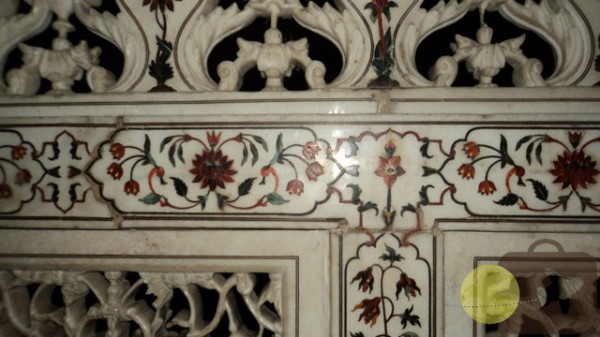 Up close you also get to see the famed Pietra Dura(above) work where intricately carved floral designs inlaid with precious stones embellish the austere marble surface like a bejeweled casket.

The recessed arches provide depth and the give the tomb a mystical aura. And then of course, there are the four minarets framing the tomb and highlighting the perfect symmetry of the complex. 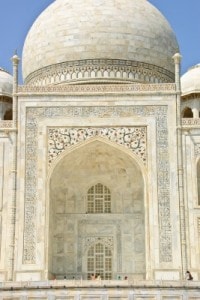 It is widely believed that the Taj Mahal was designed to represent an earthly replica of one of the houses of paradise. As we came out of the main mausoleum, the eyes fell on the full moon that was shining bright on the night sky, and the heart skipped a beat. Standing next to this exquisite creation on the banks of River Yamuna, we could indeed feel the aura Taj cast on every onlooker. Iridescent and majestic, the house of paradise shimmered in the moonlight, and we stood there…spellbound.