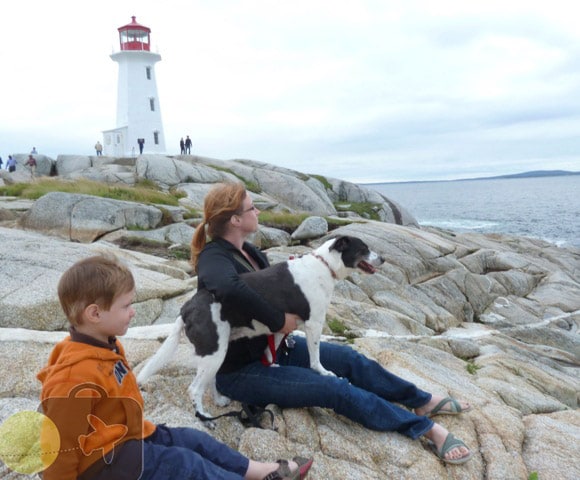 Peggy of the Cove 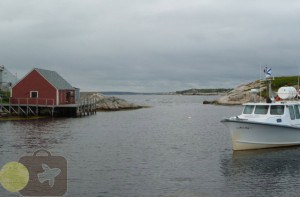 Three days, we drove, to take a picture of the dog by the ocean – true story. That’s not the whole story, but it is true.
Back when we were hunting for our first house, a decent sized yard was non-negotiable. We needed it for the puppy we wanted to get. The plan was to find a Nova Scotia Duck Tolling Retriever with orange fur and bright blue eyes. The name had already been decided on; Peggy, as in Peggys Cove, Nova Scotia.

After recovering from the staggering blow home ownership can level on your finances, I abandoned my aspiration for a purebred dog and instead acquired a little rescue puppy. She’s an odd cross between a beagle and a border collie. But, even though we didn’t end up with a Nova Scotia Duck Toller, the name stuck. We called her Peggy, after a fishing village with a population of 35 year-round residents.

So, when we hauled our squeaky trailer around Saint Margaret’s Bay, a couple of weeks ago, it was with the express intent of taking the dog’s picture at the Peggys Cove lighthouse.

The village of Peggys Cove has been hunkered into the granite shores of St. Margaret’s Bay for the past two hundred years. The photogenic community attracts visitors in droves, each on a mission to capture the lighthouse on camera. It has to be the most photographed lighthouse in Canada. And the village, with its quaint and colourful buildings, stacks of lobster traps and quintessential fishing boats, has to be the most photographed village, with a population under 40. 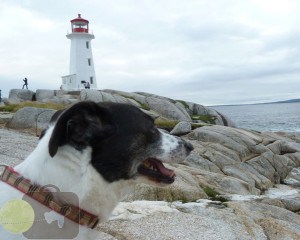 We took some dramatic photos of the dog, looking wistfully out to sea, with the iconic lighthouse in the background. We ate fish and chips and meandered through the village, snapping more pictures, of every possible subject, from every possible vantage point.

I had visited Peggys Cove once before. I believe, on that occasion, I was using a disposable film camera; that tells you how long ago it was. That trip produced 2, very grainy, pictures. This trip resulted in 64. Thank you technology, for making it possible to take zillions of pictures, some very silly, without a moment’s regret.

Travelling, from Peggys Cove, back to our nearby campground, we passed countless wood sided homes, with bright, flowery gardens and courageously colourful paint jobs. But, even amidst the colour and the boldness, one house stood out from the rest. We felt obliged to stop and pay a visit. 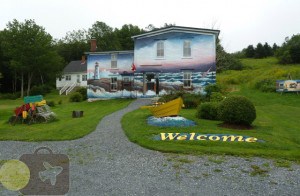 Ivan Fraser, a local artist and writer, used his family’s homestead as his canvas for an impressive mural. It depicts Peggys Cove at sunset. A similar image is the cover art for his book, Secrets: Peggy of the Cove.

Ivan is a happy, high energy character, with an infectious enthusiasm for his character, Peggy. His book is a fictional account, based on the legend that gives the village its name.

As the story, or one version of it, goes; Margaret (Peggy for short) was the only survivor of a shipwreck in the bay. She married a resident of the cove and lived there for the rest of her life. Locals started calling the place, Peggy’s Cove and eventually the name became official.

The story is likely just that. But, in his book, Ivan has developed the legend, filled in the gaps and fleshed Peggy into a believable character, who comes to life on the page. 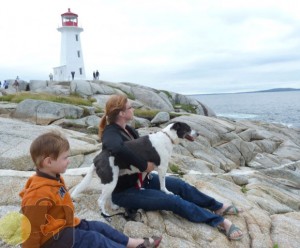 Ivan has opened the Fraser home to passers-by. The house has been in his family for generations, and is furnished with artefacts and memorabilia from his childhood and before.

During our walk through the house, he entertained us with stories of his family, friends, local characters and gave us a glimpse into life in the region. He sat with our son and played the organ in the parlour, and proudly showed us family photographs, wedding gowns and keepsakes. At the end of our visit, he autographed a copy of his book for us.

We went to Peggy’s Cove, to snap a picture by a lighthouse, but we came away with so much more. Thanks for letting us visit, Ivan. – Jen R, Staff Writer