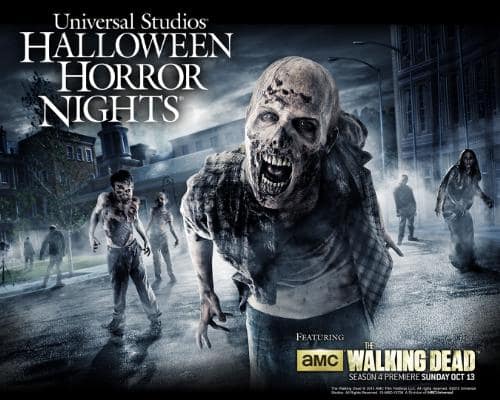 This year, Universal’s premier Halloween experience is going to be unlike anything they’ve ever featured before. The contemporary urban streets, towering skyscrapers and brick-shaped facades will be extended, and the undead will walk the streets, or more accurately, the maze.

Taking a page out of the Universal Pictures book (the movie studio that invented the horror film genre), Universal Studios Hollywood and Orlando will be creating two never done before enclosed maze settings for their award-winning “Halloween Horror Nights” event.

“Since the early 1920’s, Universal Studios’ most infamous monsters took their first breath right here on the Universal backlot,” Larry Kurzweil, President of Universal Studios Hollywood said “This very studio that invented the horror film genre traumatized movie-gores with some of the silver screen’s most indelible characters. Years later, it seems only fitting that the studio make its urban production sets accessible to ‘Halloween Horror Nights’ guests as we bring nightmares to life with contemporary horror properties.”

In the first maze, guests will have the opportunity to experience the undead in their goriest – a scene inspired by season 3 of AMC’s Golden-Globe nominated, Emmy Award winning television series, “The Walking Dead.”

Guests will be “abandoned” in the frightful maze during the dead of night. Hordes of decomposing, flesh-eating zombies will stalk them in swarms at the entry of the zombie apocalypse scare zone. The rotting, walking corpses will be lurking throughout alleyways and protective doors, leaving guests with only one way to escape: the maze.

Should guests survive the horrific maze, they’ll find themselves in the core of the show’s impenetrable prison, the West Georgia Correctional Facility. To avoid being eaten by the mass of flesh-eating monsters, guests will have to retreat into the zombie-laden wilderness and then make their way to Woodbury – a seemingly quaint town. But dark secrets lie beneath the town’s façade.

The second maze setting will be “Black Sabbath: 13 3D.” Based on the multi-platinum rock band’s newest Billboard release, “13,” the maze will be located within the confines of a soundstage. Some of the group’s biggest hits – “War Pigs,” “Electric Funeral,” “Black Sabbath,” Paranoid,” and more – will be paired with the 3D maze (the only one in existence), leaving guests to travel through horrifying graveyards, madhouses and “deadly” battlefields. The journey will lead them to Lucifer and his bride, and a gruesomely horrific scene – bubbling pools of “radioactive water” and blood-soaked dead bodies.

Though these living, breathing mazes will definitely be the height of attraction this year, there will be other frightful attractions at this year’s “Halloween Horror Nights.”

“Evil Dead: Book of the Dead,” which is inspired by Sony Pictures Home Entertainment’s remake of the cult classic, “Insidious: Into The Further,” which is based on the 2010 thriller “Insidious” and its upcoming sequel, “Insidious: Chapter 2” will leave taunt and terrify this year’s guests. New scare zones based on the Universal Pictures’ blockbuster movie, “The Purge” and Universal Studios Home Entertainments upcoming release of “Curse of Chucky” will also be joining the lineup, giving guests something to scream about.

Additional mazes may also be added to the “Halloween Horror Nights” at both Universal Studios. Announcements on any additions will be made shortly.

Parents should note that this event is not for small children.