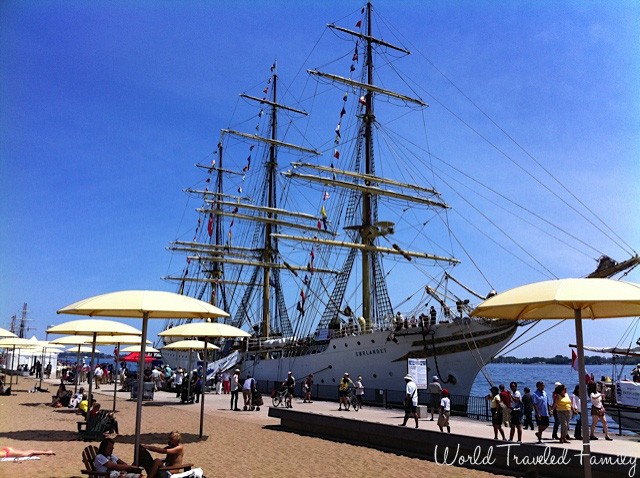 Daytripping in Ontario at The Tall Ships Waterfront Festival

This Summer the Tall Ships will be making their way through the Great Lakes.

These ships are replicas of some of the privateer vessels that fought during the war of 1812.  Many of these ships were built to preserve maritime history and to teach new generations about the war and its historical significance. 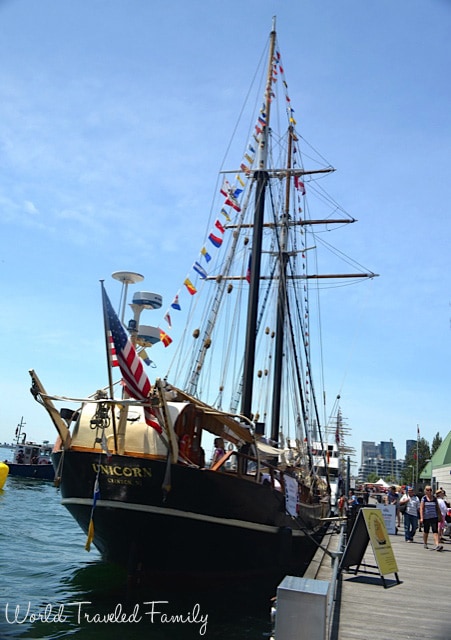 When I saw that Toronto was hosting the Tall Ships festival I jumped at the chance to show my boys this incredible fleet. 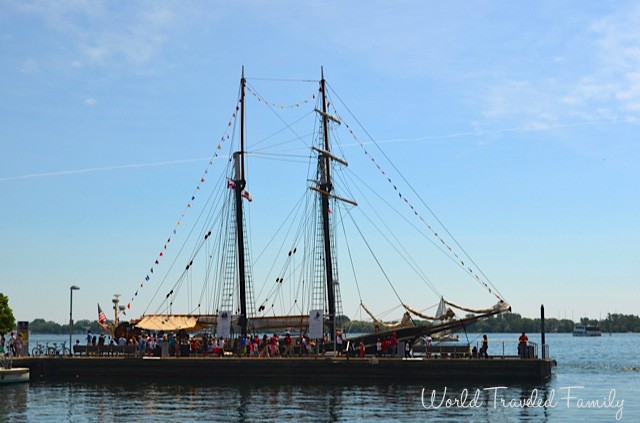 They are both fascinated with trucks, cars, boats, trains, planes, basically anything that moves(big and small) so I hoped they would love seeing this beautiful vessels up close.  Anyone could visit the waterfront and see the ships, but you needed a festival pass to tour them.    The best part for my pair, however, was being able to get onboard each ship and see how they were laid out. 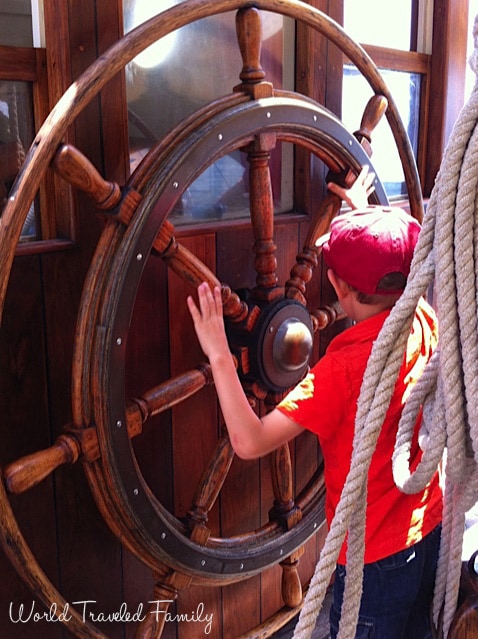 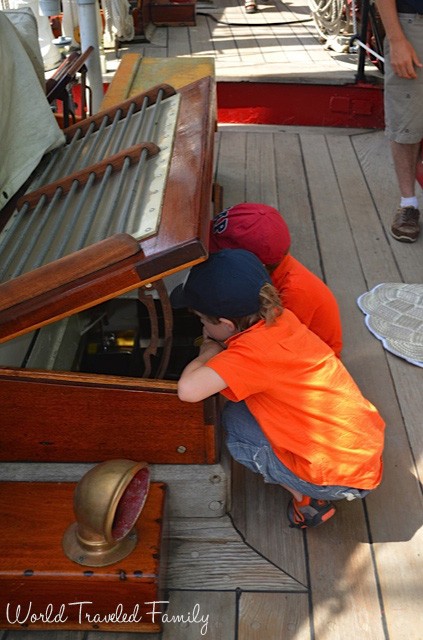 The crew members were scattered throughout the ship to answer questions and show the kids cool features about each schooner.

As my boys explored I was able to chat with some of the crew on the ships, who revealed that most of the vessels are used for training.

Built in 1981, the Fair Jeanne offers 5-21 day programs for both young and old sailors.   High School students will love that the longer program will result in a credit. Students will earn Drama credits ‘through ‘living’ history; sailing alongside other tall ships between Canadian and American ports, participating in large-scale re-enactments and engaging in mock sea-battles with plenty of cannon fire’.  Adults who would like to learn more about how the tall ship runs can register to be part of the crew while it sails to the Festival circuit. 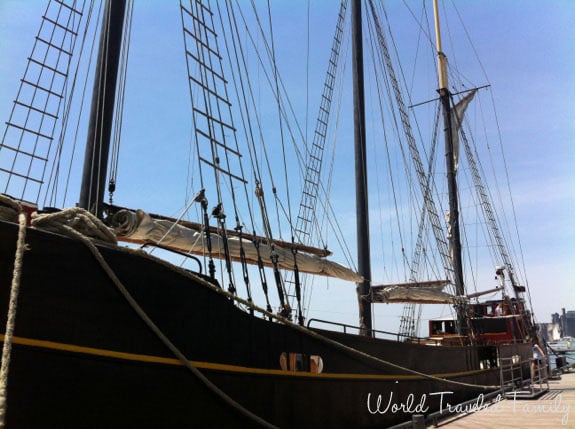 The Pride of Baltimore II was commissioned in 1988 as a sailing memorial to her immediate predecessor, the original Pride of Baltimore, which was tragically sunk by a white squall off Puerto Rico in 1986, taking her captain and three crew members down with her. This majestic ship has sailed nearly 200,000 miles, and visited over 200 ports in 40 countries educating the public about the war of 1812. 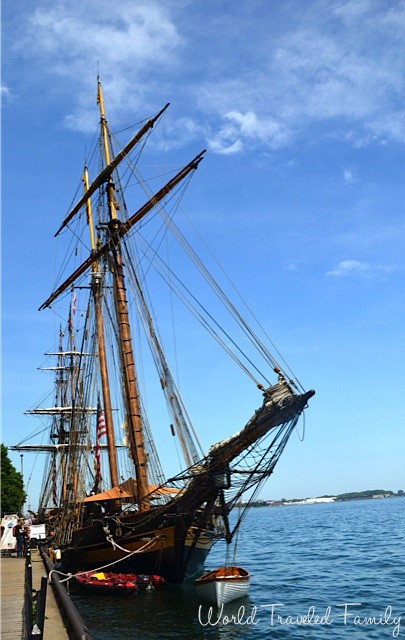 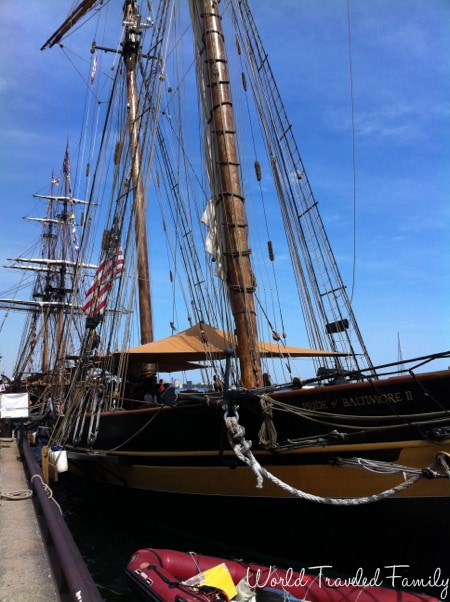 U.S. Brig Niagara is a training ship that is comprised of 1/3 professional 1/3, trainees, 1/3 apprentice crew members. With a crew of 38, the ship sails around the Great Lakes for the festivals, while also offering educational opportunities and day sails for special events.  We were able to go down below on the Brig Niagara, which was pretty exciting for the kids! 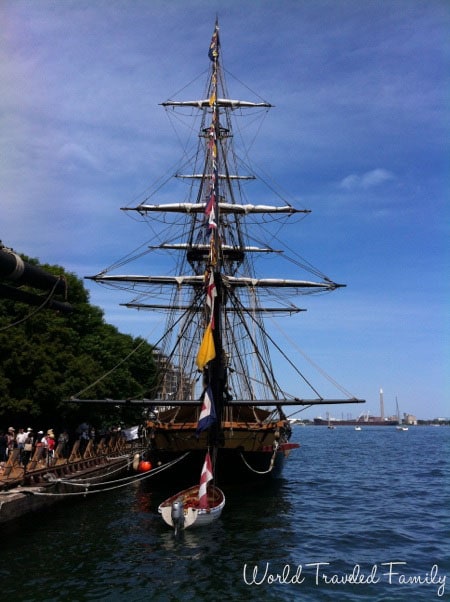 The biggest ship in the fleet is Norwegian’s SØRLANDET.  Built in 1927, SØRLANDET,  is currently the home of Class Afloat, a Canadian accredited organization dedicated to bringing the “classroom to the world” for high school students preparing to enter college or university. 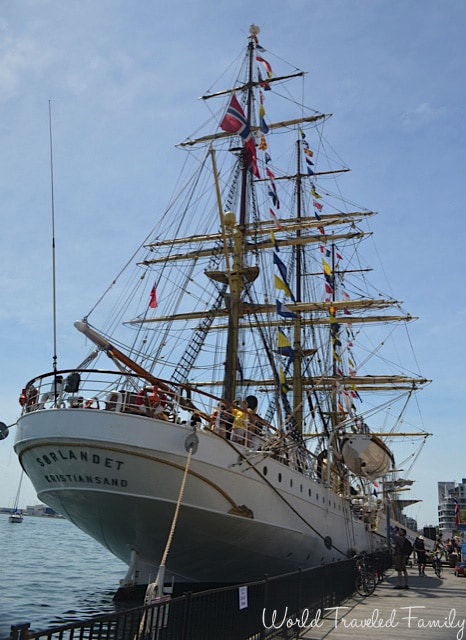 It has been years since I walked Toronto’s Harbourfront and I have to say it has come a long way.  It is now a beautiful place where visitors of all ages can come and explore.  There was a lot of things for the kids to see and many places to grab a snack.  Plus, it was 30 degrees the day visited but the breeze made it feel much less, which was nice!

I knew the day was a success when my oldest son asked me at bedtime, ‘Mom, What happened during the war of 1812?’

If you missed the Toronto show and want to still see the Tall Ships they will be touring Ontario:

Previous articleExperience Niagara Falls On The Maid of The Mist!
Next articleThe Joovy CocoonX2 ~ My Top Pick For Summer Day Trips