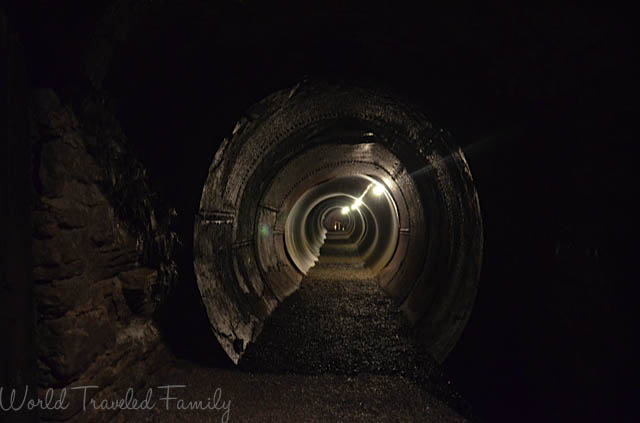 Daytripping in New York State at The Lockport Caves

With school back in we haven’t been able do as much with our boys as we did this Summer.  Looking for some cool adventure weekend attractions, I came across some information on the Lockport Cave tour.  Just $12 for adults and $7 for kids 5+, we decided to check it out and were happy we made the trip to Lockport, NY.

Our tour started at the Erie Canal, which was built in the early 1820s. At the time most goods were transported by carriage, but Governor DeWitt Clinton wanted to capitalize on water travel as it was faster and more efficient.  His plan to build the Erie Canal was met with lots of opposition, but in the end it allowed residents from the east and west to be able to move more freely between both places, which in turn ‘strengthened the Union‘.

Not long after the Canal was completed, the city started work on better locks that would allow passage of bigger boats that were now starting to travel the canal. 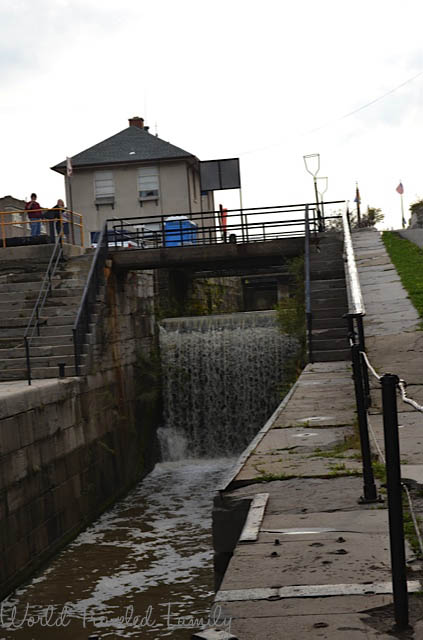 Originally the rights to the surplus water from the locks were given to the highest bidder after the canal’s commissioners realized its ability to create energy.

Almost 35 years later a clever inventor, Birdsill Holly, arrived in town.  Looking to capitalize on his factory plans,  the Lockport Hydraulic Co dug(or blasted) a tunnel that originated at the locks to power Birdsil’s sewing machine factory.  Six years later the tunnel was expanded to help power a second factory; Richmond Manufacturing(shown below) and extended in 1880 later to also accommodate the Lockport Pulp Company. 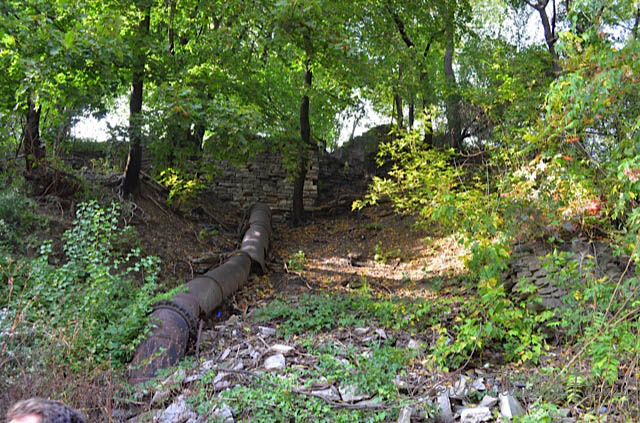 Today, these tunnels are an incredible reminder of how innovative the founders of industry were as the water that flowed through them created clean energy – and lots of it!

After learning about the creation of the locks we walked along the side of the canal where the three factories once stood.  Tragically, two of those buildings met their demise by fire and the third was abandoned after it’s products were no longer relevant for the evolving market.  Eventually it collapsed into itself and today all that remains are a few shallow stone walls and the ‘caves’. 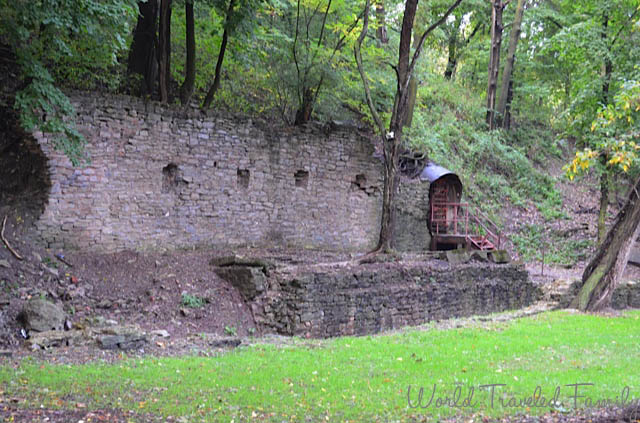 The entrance to the Lockport Caves is actually the tunnel that facilitated the water flow for the third factory.  Originally there were two, but the second one was removed years ago due to its deteriorated state. 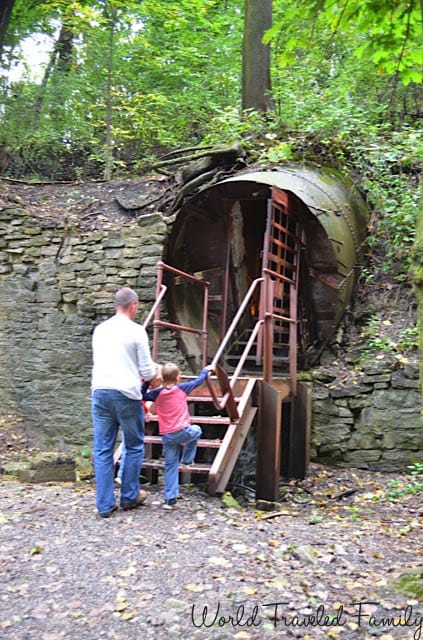 Once inside it is impressive to see the size of the passage that was created by using a simple shaft, sledge hammer and some explosives.   Our guide told us they were able to carve out 15-18″ of rock per day. At this rate it took 2.5 years to create the first tunnel,  1.5 years to do the second expansion and between 2-2.5 years to complete the third section, which as you can see from the size of the entrance, had much bigger pipes flowing from it.

As we made our way through the caves we could see the amount of work that went into carving them out from the tools that were available 170 years ago.  Ground water also seeps through the rock which would have added to the flow moving through the tunnel at the time. 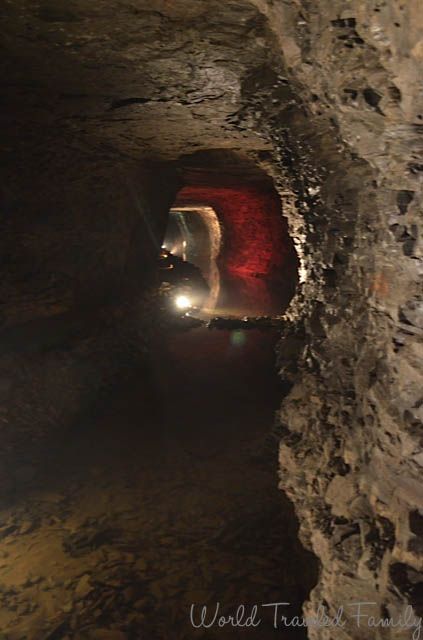 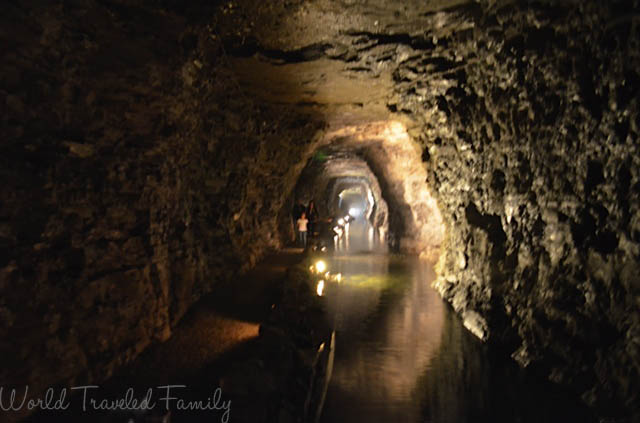 And while most of our tour was on foot, the last 10 minutes was done by boat, which was a neat way to see how far down the whole system goes. 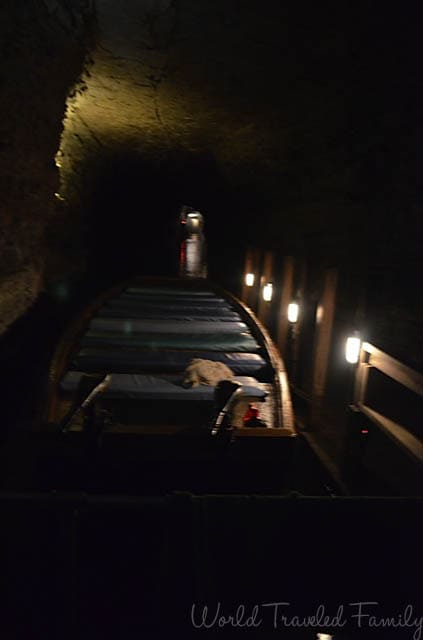 The lighting in the tunnel was sparse, which made for some eery photos. 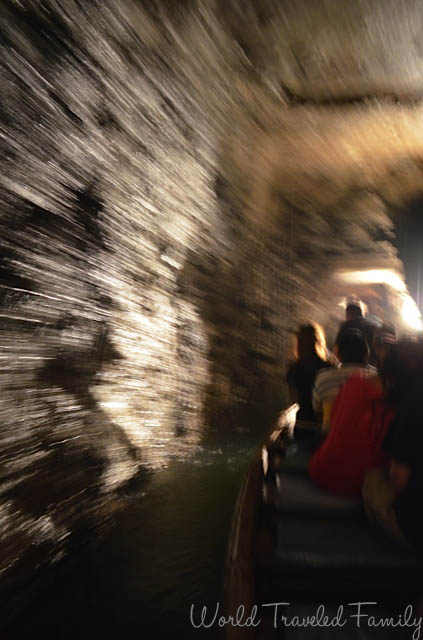 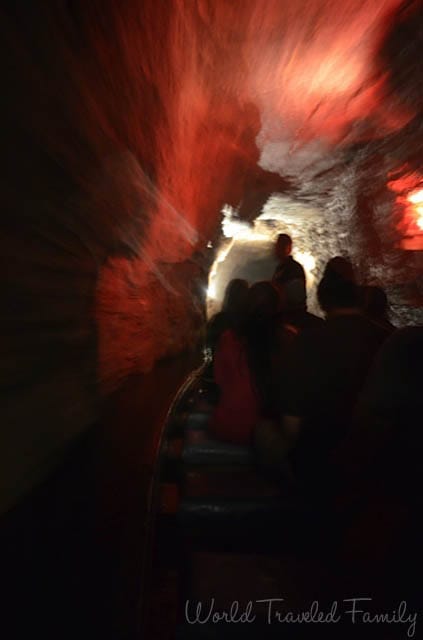 The Lockport caves were abandoned in the early 1940’s until a local resident took an interest in the system in the 70’s.  He excavated a small portion to conduct tours, but was expanded in the late 90’s with the help of a partner to include the boat ride and upgraded lighting.

If you are in the Buffalo area and are looking for an interesting tour that also has some cool historical information attached to it, the Lockport Caves are a great place to visit. BUT you will have to wait until the Spring as they are now closed for the season, with the exception of the Ghost Hunters Experience, which requires a minimum purchase of 10 passes($350).