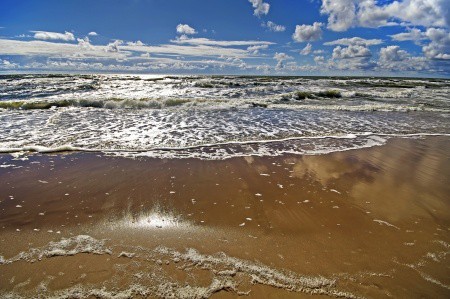 New Report Finds Many US Beaches below Safety Standards

If your holiday plans for Canada Day or July 4th long weekend involve a trip to the beach, you need to take note of a new report by the U.S. Environmental Protection Agency, which found that ten percent of water samples taken from U.S. coastal and lake beaches fail to meet safety standards.

“There can be hidden dangers lurking in many of our waterways in the form of bacteria and viruses that can cause a great inventory of illnesses like dysentery, hepatitis, stomach flu, infections and rashes.”

The report is based on nearly 500 samples taken annually at beaches around the country. They found Great Lakes beaches have the highest failure rate with major bacterial content.

The agency said that the findings prove that water pollution due to storm water runoff and sewage overflows were persistent in the US.

On the brighter side, the agency did give star points to 35 popular beaches for their superb water quality.

These beaches met national water quality standards 98 percent of the time over the past five years.

The 17 “repeat offenders” that continue to have serious water pollution problems include:

Comparatively, 13 percent of the samples from the Great Lakes failed to meet the standard. Other beaches where the swimming water was found to be highly contaminated include, the Gulf Coast (12 percent), New England (11 percent), the western coast (9 percent), New York and New Jersey coasts (7 percent), and the southeast (7 percent).

At Delmarva Peninsula area on the East Coast, only 4 percent of the samples failed the test, making these waters safe for swimming.

The EPA has found that approximately 3.5 million Americans fall sick due to contact with raw sewage overflows each year.

“The elderly and little kids are most likely to fall prey to contamination in the water because of their weaker immune systems,” Fleischli said.

“Children are also more likely to dunk their heads under the water or swallow water when swimming, both of which increase risk,” he added.

Beaches are required to be tested under the federal Beaches Environmental Assessment and Coastal Health (BEACH) Act for bacteria. If the bacteria level is too high, especially after heavy rain, beaches may be closed or people advised not to swim.

The best way to safeguard beaches the council said is to invest in “smarter, greener infrastructure on land, like porous pavement, green roofs, parks, roadside plantings and rain barrels.”

The simple alterations help rain to evaporate or filter into the ground instead of being carried from dirty streets to beaches.