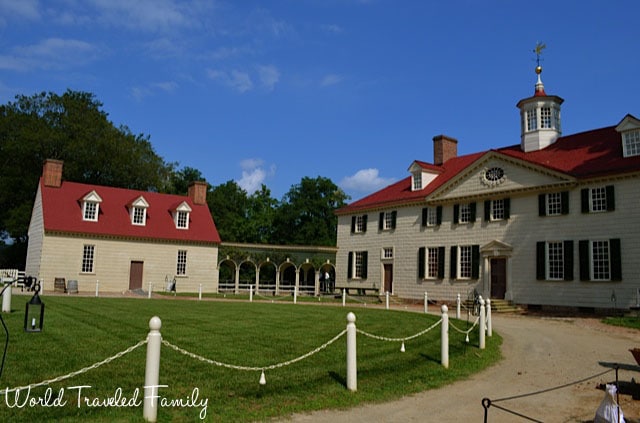 Built in 1735, George Washington’s Mount Vernon is an incredible estate.  What started out as a modest home was transformed over fifty years into an impressive 21 room mansion that was owned by the famous first president. 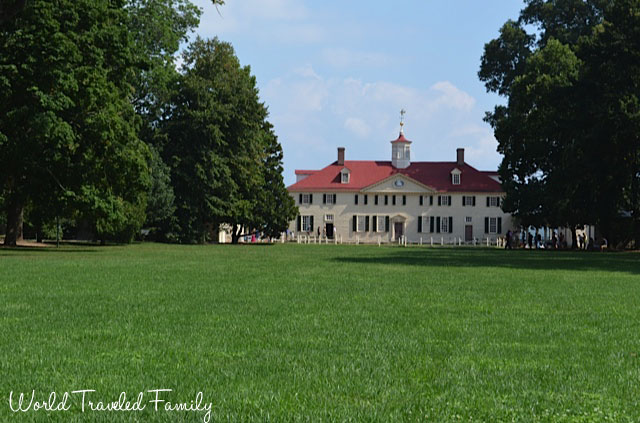 George and Martha Washington lived at Mount Vernon for almost five decades before their passing.  George passed away here on December 14th, 1799 and Martha a couple of years after in 1802. The home was lived in by relatives of the Washingtons after Martha’s passing.  In 1853 after hearing news that the mansion had fallen into disrepair, Ann Pamela Cunningham started an organization to preserve this historic home.   The Mount Vernon Ladies Association purchased the home and the 200 acres of adjoining land from the president’s great-great nephew John Augustine Washington III in 1860 and opened the American Landmark to the public that year.

Over the years the home has been meticulously restored to how it would have been in 1799, during George’s last year.

During our trip to Washington DC, we travelled 30 minutes outside the city to visit this famous historical residence and tour the beautiful grounds.

When you arrive at Mount Vernon you pass through the Ford Education Center where you can watch 2 short videos; one that introduces you to the property and a second, the famous couple who called Mount Vernon their home.

Afterwards a path takes you to the front gates of the property where you get your first look at the estate.  A path on both the right and the left of the bowling green takes you to the home.  Both sides pass by the upper and lower gardens. 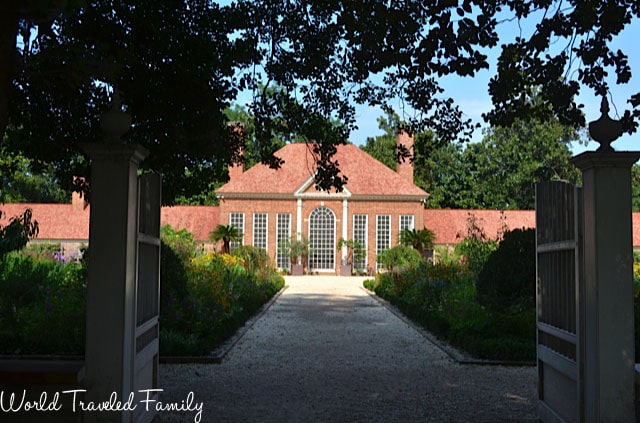 Our first stop was the Mansion.  Visitors enter into the servants area where a guide gives you a briefing on the home.  To my dismay no photography is allowed inside the main mansion.  The tour took us through the first two floors of the home and gave us a look at how George and Martha lived.  Many of the rooms are painted in bold, modern colors.  The formal and entertaining spaces are adorned with beautiful ornate fireplaces and plaster details on the walls and ceilings. Upstairs the home has 5 chambers for guests and family.  The Washingtons often had friends and family staying with them.  In fact, in one year more than 600 guests stayed at the home.  A pass through created by the Mount Vernon Ladies Association takes guests to the private wing of the home where George and Martha’s room was.  Elegant and understated, the guide told us that almost everything in this room belonged to the couple.  This is also where the former president passed away.  After his passing Martha had the room sealed and moved her sleeping quarters to the third floor.

The third floor is only open for tours at Christmas time.

After viewing George’s office we were ushered outside and through the vestibule where the kitchen is situated.  At this point were allowed to take pictures again.  The kitchen consists of three rooms; the main cooking area, the scullery, an additional prep space and the larder, a cooler space for storing perishables.  Having the kitchen separate from the house was common in Southern Plantations as it kept the noise, heat and potential threat of fire away from the home. 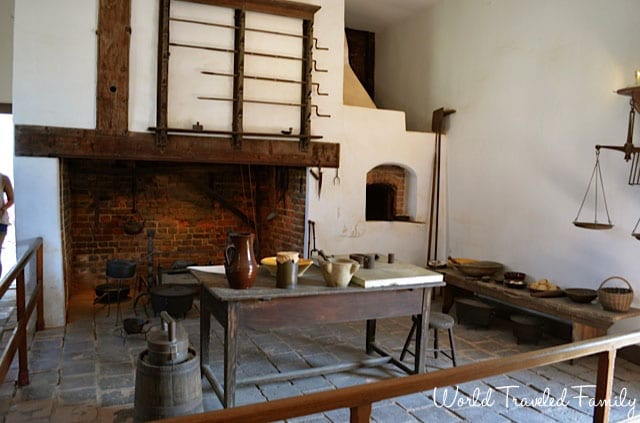 Various buildings on this side of the property were used for tending the farm.  There is also the coach house and stable that housed the horses and also a storage area for the couple’s carriage. 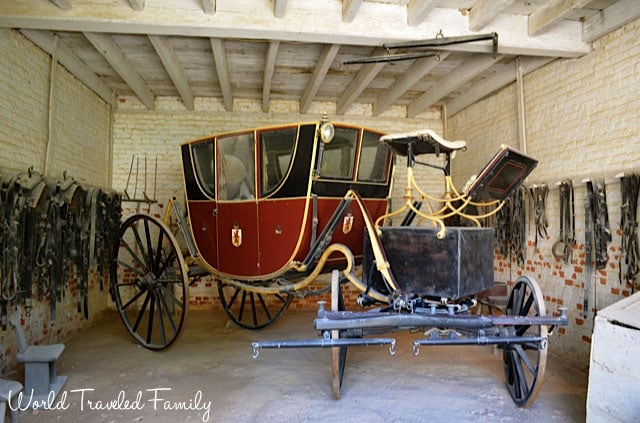 Also located to the South are two tombs; the original tomb that held the bodies of George, Martha and 20 other family members and the new tomb that was built in 1831.  In the former president’s will he requested that a new tomb be created. 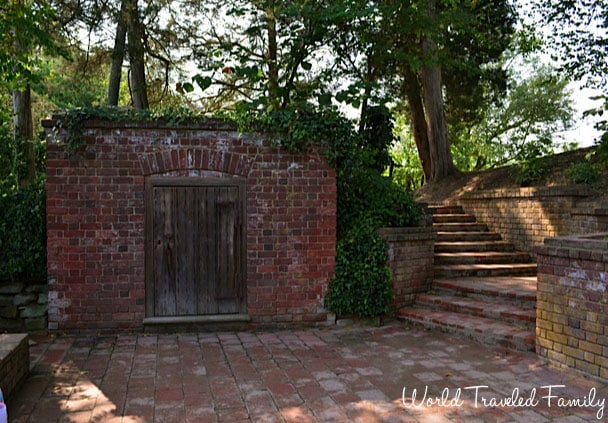 ‘The family Vault at Mount Vernon requiring repairs, and being improperly situated besides, I desire that a new one of Brick, and upon a larger Scale, may be built at the foot of what is commonly called the Vineyard Inclosure. . . In which my remains, with those of my deceased relatives (now in the old Vault) and such others of my family as may chuse to be entombed there, may be deposited.’ 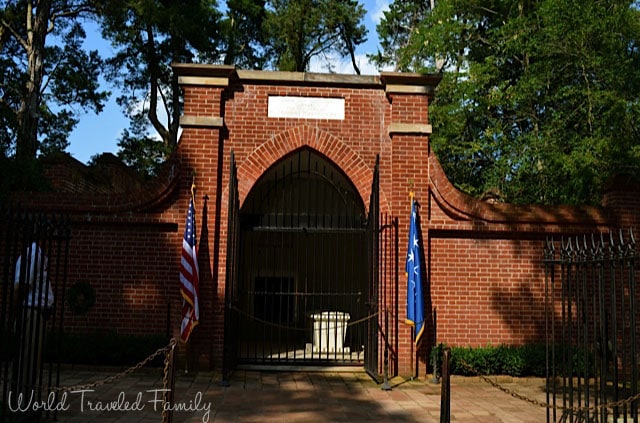 Beyond the new tomb is the Slave memorial and the Pioneer Farm.

On the North side there are various buildings that housed some of the home’s workers and the property’s supplies. 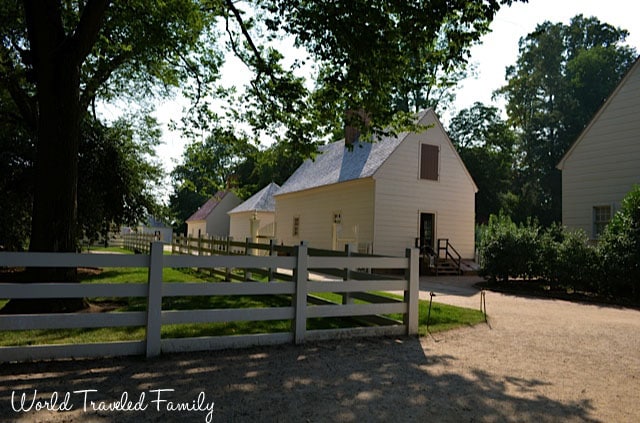 A shoemaker’s shop, stove room and a blacksmith shop were located on this side of the property, as was the slaves quarters.  About 25% of the slaves(approximately 85) that worked for the Washingtons  lived in the bunk houses, that were divided into men’s and women’s. 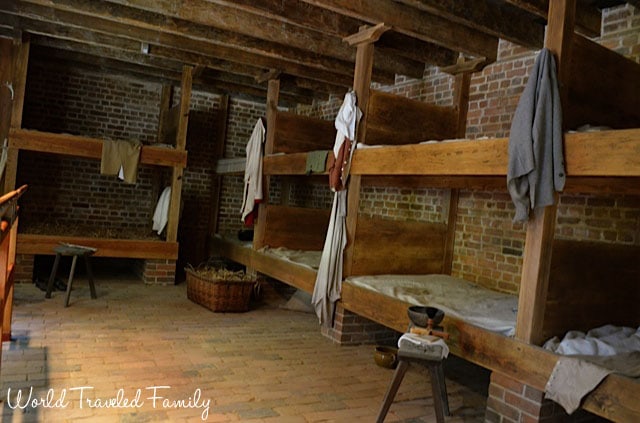 The workers slept in straw beds and ate by a fire that was set up at the end of the room.

The Washingtons had a famous history with slavery.  A plaque inside the museum chronicles that history noting,

Just a year after his passing, Martha freed George’s slaves.

More of this history is shown in the museum that is located North West of the Mansion.  Here visitors can see more of the Washington’s personal effects, including the Generals famous dentures that were carved from hippopotamus and elephant ivory and held together with gold springs, not wood as much of the world believes.  In total 23 galleries and theater spaces give visitors a better look at Mr. Washington and the accomplishments that made him such an important piece of America’s History.

In total we were at Mount Vernon for 3 hours.  The guide says to allow 4-5 in order to be able to see everything.  I agree with this as we didn’t venture down to the wharf or to the pioneer farm.  When you arrive you will be given a set time to tour the house. Aside from that you are free to tour the property at your leisure.

We drove to Mount Vernon, but there are boat cruises that you can take that show the estate from the back as you arrive.   If you are visiting the area, I highly recommend setting some time aside to see this beautiful home.  But be aware that Mount Vernon is a very popular tourist destination so planning your trip during the week may allow you to see it without having to wade through the crowds.