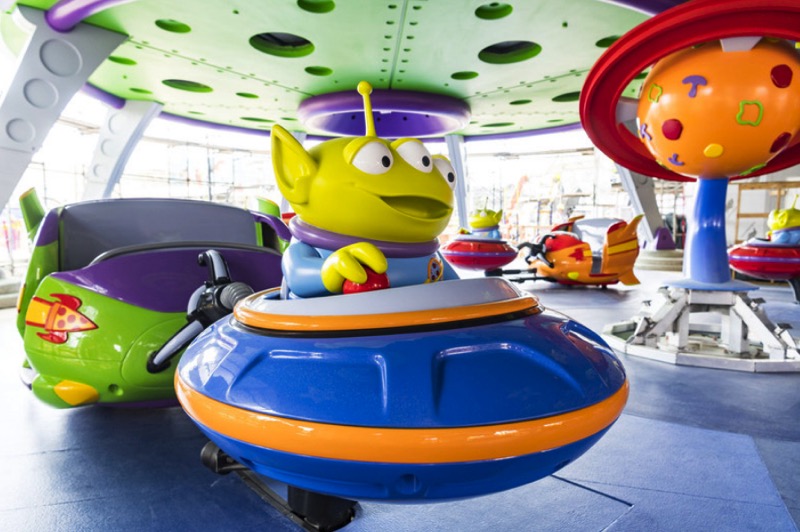 As the excitement continues to build for the opening of Toy Story Land on June 30, more exciting news was released from the team at Disney’s Hollywood Studios today.

Guests will “shrink” to the size of a toy as they enter into this land full of everyone’s favorite toys, building blocks and game pieces. Across eleven fun-filled acres designed to recreate Andy’s toy-filled backyard from the Disney•Pixar “Toy Story” films, guests will be fully engaged in the wonderful world where Woody, Buzz, Jessie and all their pals come out to play. Attractions and experiences straight from Andy’s imagination will treat park-goers to the best playtime ever – even after the Tinker Toy lights come on.

Designed as a playset Andy won at the Pizza Planet restaurant, this all-new attraction is out-of-this-world fun. “Toy Story” green aliens have powered up their flying saucers and earthbound guests get to play along. In rocket ship toys, guests swirl and whirl among toy planets and space stations as part of the game while “The Claw” hangs overhead. This space adventure is bathed in multi-color lighting and sound effects from throughout the galaxies. NEW: Disney has released the first-ever images of the new attraction, showing the toy spaceships being piloted by everyone’s favorite aliens.

Much like March of the First Order with the Captain Phasma and the Stormtroopers,  Sarge and the Green Army Man Drum Corps will be marching several times a day through Toy Story Land. As the Drum Corps marches on, everyone’s invited to follow another contingent of Green Army Men to their fun and interactive boot camp, where they’ll “toy” with guests using giant Pixar balls, oversized crayons and a game of SARGE SAYS (their own spin on Simon Says).

Wheezy, the squeaky toy penguin from the “Toy Story” films, will do more than bring smiles to the faces of guests riding Slinky Dog Dash, the family-style coaster coming to Toy Story Land. The all-new Audio-Animatronics figure will appear in the last scene of the coaster singing “You’ve Got a Friend in Me” in that great (and unexpected) voice of his.  Wheezy will be accompanied by his toy friends: Mike the tape recorder, who’s provided him with a microphone, and Mr. Spell, who “texts” funny commentary.

As expected there will be some really fun merchandise centererd around the franchise.  We know the popcorn buckets are a huge hit but soon there will be three-eyed space aliens or Slinky Dog headbands!

Slinky Dog also inspires a toy with light-up rings; he can even strrreetch around the waist or shoulders and double as a fashion accessory. Kids get bragging rights with commemorative “I Played There” t-shirts that let the world know they were among the first guests to Toy Story Land.