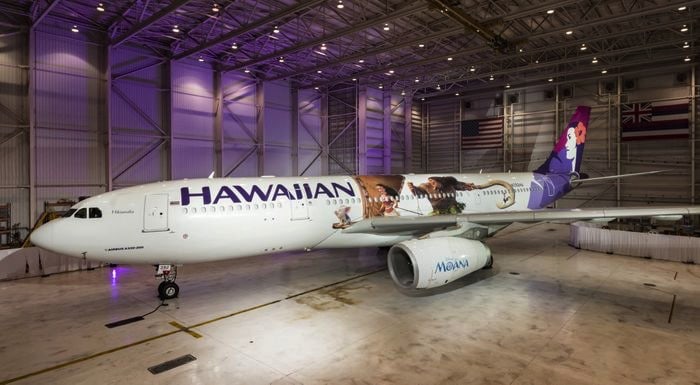 Nothing is cooler than looking out the window at your terminal and seeing an airplane with your kid’s favorite movie characters painted all over it.

In the past Disney has partnered with airlines to bring Mickey, Olaf and Elsa to life on the side of aircrafts headed to Orlando.

Today, Hawaiian Airlines, in collaboration with The Walt Disney Studios, unveiled the first of three custom Airbus A330 aircraft being adorned with imagery from the highly anticipated, CG-animated comedy adventure “Moana.” The inaugural decal design features four characters from the movie on Hawaiian’s fuselage as they take off on a wayfinding journey, including the demigod Maui, the adventurous teenager Moana, and her two friends: Heihei the rooster and Pua the pig. 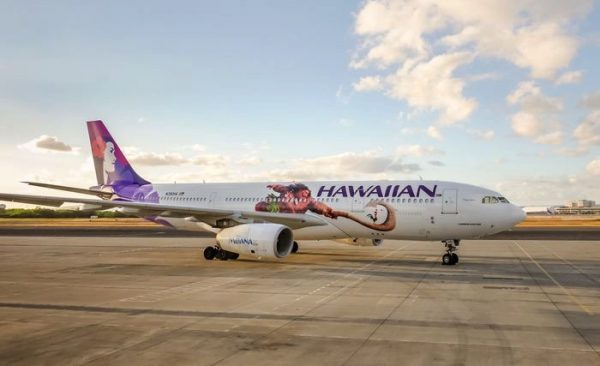 “At Hawaiian Airlines, we are modern navigators, carrying guests across vast oceans to experience the unparalleled beauty of our home and richness of our culture,” said Peter Ingram, chief commercial officer for Hawaiian Airlines. “In important ways, Moana’s voyage of discovery parallels that of our guests’ own travel adventures, and we’re pleased to work with Disney to take this wonderful story to the skies.”

Dwayne Johnson, the voice of demigod Maui, and Auli‘i Cravalho, the Hawaiʻi-born actress who is the voice of Moana, were among the first to see the inspiring design when the plane was revealed earlier today in a hangar at the airline’s home base at Honolulu International Airport. The surprise reveal was hosted by Hawaiian Airlines CEO Mark Dunkerley at a special event attended by several hundred members of the airline’s Team Kōkua program — employees and their families who have volunteered their time and service to give back to the local community. 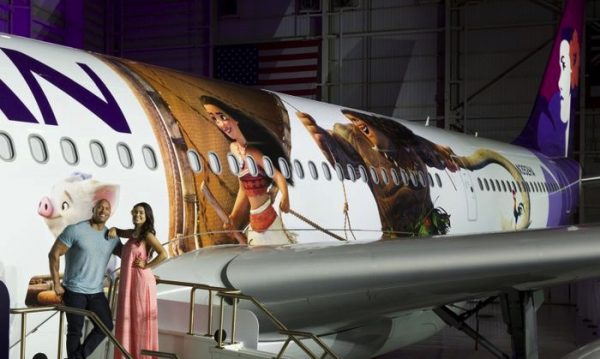 Next month, Hawaiian will reveal two additional livery designs featuring custom-made decals that show the characters interacting with the planes in dynamic and engaging ways. The unique artwork, created by Walt Disney Animation Studios in collaboration with Hawaiian’s team, reimagines each aircraft as a modern-day voyaging canoe, flying Moana, Maui, and their friends to new and exciting destinations. 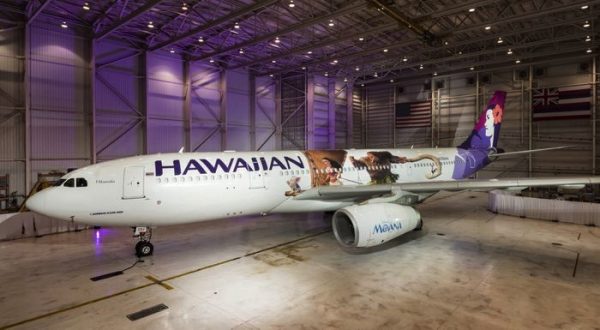 The overhead luggage bins on all three “Moana”-themed Airbus A330s are also being decorated with characters and artwork from the film. Look for the planes to fly on Hawaiian’s regularly scheduled U.S. domestic routes as well as to international destinations including Brisbane and Sydney, Australia; Osaka and Tokyo, Japan; and Auckland, New Zealand through March of 2017.

If you are lucky enough to get on one of these special planes,  you can enjoy special inflight entertainment to include an exclusive welcome video inspired by the film, the “Moana” movie trailer, and Cravalho’s casting video. The airline will also offer co-branded, limited-edition products such as blankets, towels and children’s and adult apparel.