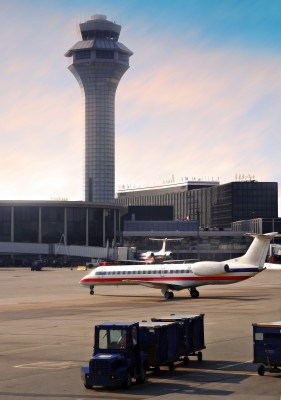 Two employees at JFK’s air traffic control tower are under investigation by the Federal Aviation Administration, after a child’s voice was recorded communicating with planes.

An air traffic controller, apparently, brought his child to work with him and allowed the child to communicate with pilots on an air traffic control frequency. The child successfully cleared two planes for takeoff. It is apparent that this was done under full supervision. It is reported that pilots were notified, in advance, that the child would be communicating over the radio. None of the pilots, heard in the recordings, showed any signs of being surprised or upset by the communications.

The FAA, however, is not taking the incident lightly. FAA Administrator Randy Babbitt said in a statement,

“This lapse in judgment not only violated FAA’s own policies, but common sense standards for professional conduct. These kinds of distractions are totally unacceptable. We have an incredible team of professionals who safely control our nation’s skies every single day. This kind of behavior does not reflect the true caliber of our workforce.”

Dave Pascoe is owner of liveatc.net, a site that posts recordings of air traffic communications. The recordings are, primarily, used for pilot education. His site posted the communications in question.

Pascoe believes the incident has been blown out of proportion, “when you listen to any of the recordings, the situation in the tower is very controlled. There is no hint … that anyone was too busy or anyone was interrupting the planes. The kid cleared two airplanes. It was very controlled and I don’t think safety was compromised, nor should anyone be disciplined for this.”

Pascoe concedes, “Considering how skittish the public is, maybe it shouldn’t be done, but I think there should be a procedure to allow visitors in the control tower.”

“We do not condone this type of behavior in any way. It is not indicative of the highest professional standards that controllers set for themselves and exceed each and every day in the advancement of aviation safety.”

The air traffic controller and his supervisor have been assigned to other duties pending the FAA investigation. – Jen R, Staff Writer