Hiking, biking, fishing, camping, its summertime and summer was made for outdoor fun.  But, outdoor adventure has a nasty foe.  That foes name is Lyme disease.  Superhero parents need to educate themselves on their nemesis so they can fight back and avert disaster.

Lyme disease, if left untreated, can have nasty consequences like arthritis, numbness, and paralysis.  If it is caught early, however, the disease is easily treated with antibiotics.

In 70% to 80% of Lyme cases, the first symptom is a bull’s eye rash.  It literally looks like a red bull’s eye on the skin.  Other early signs are flu-like symptoms and extreme fatigue.  These symptoms may present anywhere from three days to one month after a bite from an infected tick. 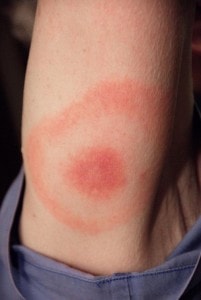 Lyme disease is transmitted by black-legged ticks (aka deer ticks).  Ticks are a parasitic insect that attaches to other animals, i.e. birds, deer, humans.  They gorge themselves on the blood of their host and, in the process, get a piggy-back ride to a new location.  As a result of this piggy-backing, Lyme disease can now be found across North America, though the highest concentrations continue to be along the East and West Coasts and the Great Lakes region.

The best defense is to avoid being bitten in the first place, and no, that doesnt mean imprisoning the kids indoors all summer.  You need to know your enemy.

Ticks like to hang out in long grass and are most likely to attach themselves, to you and your family, when you are in or near grassy areas.  Dress yourself and your children in long sleeves and pants when gallivanting in high-risk locations.  Tuck pant legs into socks to create a tick barrier.  Stay in the middle of trails and pathways and avoid brushing up against the long grass along the perimeters.  I know its nearly impossible to keep young children from venturing off the trail but try.

Government websites recommend the use of bug repellents containing DEET.  Many parents are not fans of this method, but it is an added line of defense when roaming in very high-risk environments.  Use your discretion. 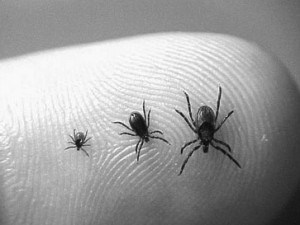 Its a good idea to wear light coloured clothing.  Black-legged ticks are very small (about the size of a freckle) and dark.  Its much easier to spot them against light colours.  Speaking of spotting them, check yourself and your children for ticks frequently.  An infected tick is much more likely to transmit Lyme if it has been feasting on its host for 24 hours or more.  Catch a tick bite early and its more likely to be an inconvenience than a cause for alarm.

If you happen to find a tick that has defeated your multi-layered defenses, use tweezers, as close to the skin as possible and remove it.  Place the tick in a container and bring it with you to visit the doctor.  The doctor will want to see the bite, will want to know when and where (geographically) the bite occurred and may send the tick away for testing.

Lyme disease has the potential to put a lid on your familys summer fun, but now that youre educated on early detection and tick avoidance, you and your family can relax and enjoy the great outdoors. – Jen R, Staff Writer

Previous articleLEED Hotels are a Great Choice for Environmentally Conscious Parents
Next articleCamping With Kids: Choose KOA for a Fun Family Getaway