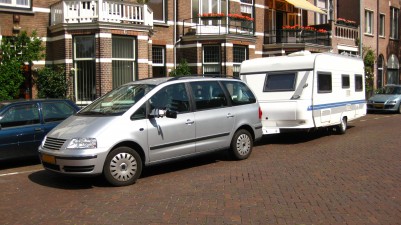 Road Trip With the Kids? Here are Some Tips to Get You Through

Tomorrow, my family and I will embark on a road trip; a journey that will take us 16 hours north of our home outside Toronto, Ontario.  I’m sure it goes without saying, but 16 hours is a long time for a three-year-old to sit in the car.

We’re crazy you say?  Well, maybe.  But, we’re not strangers to road trips.  My husband and I once drove from Toronto to Juarez, Mexico and back.  But, that was in our pre-kiddie days.  Since having our son, we’ve taken trips here and there, but this is going to be a doozey.

In preparation for this, most doozey of road trips, I conducted an informal survey of parents who are experienced at soldiering through hours of driving with car imprisoned kids.  The following collection of tips is what I came away with.

First on everyone’s list was the ubiquitous DVD player.  It probably comes as no surprise that the in-car entertainment system is indispensible to most families, on long journeys.  I know, I know, most of us try to limit the amount of time our kids spend watching TV, but I’ll admit; when I was a kid, I would have given my right arm to have a TV in the car.  These days, a supply of, parent approved, DVDs is a great tool to help kids get through long car trips.

The parents I questioned try to be realistic in their expectations and tend to limit the amount of driving done in a day.  Many start out early in the hope that the kids will sleep in the car, a tactic that doesn’t always work.  They make frequent stops for potty breaks and leg stretching and sometimes a little sight-seeing.

I was told to pack snacks and a cooler full of beverages.  This will result in more potty breaks, but we’ve already decided we like those, so it’s ok.  Idealists pack a selection of healthy snacks, but one mom I questioned, admitted that she packs a combination of healthy snacks and junk.  Why not throw in a few treats?  It’s a vacation after all.

Novelty will always kick boredom in the rear-end, and some parents attested to buying new books, toys or DVDs for long trips.  It doesn’t have to be anything big, just a little something to surprise the kids with at a critical moment of restlessness.  One mom even suggested wrapping the items and giving them as road trip gifts.  It’s a little bit more work, but a fun idea.

DVDs and snacks and new books and toys will only keep boredom at bay for so long, however.  Eventually, we’ll have to come up with something else.  Enter the road trip games.  Older kids can play away on hand-held game units, if that’s their style.  But the parents of younger kids all suggested some variation of ‘I spy’.  There’s the traditional game of, “I spy with my eye, something that is…red.”  Then there’s a version where different sights are allotted points based on the likelihood of being spotted, e.g., 7 points for a flag, 5 points for a cow, 2 points for an RV.  The person who accumulates the most points wins.

Kim Kippenhuck had the best I Spy of them all.  Kim and her husband just pulled an epic road trip, with their young daughters, from Ontario to Newfoundland and back.  Kim explained her I Spy rules like this, “everyone was assigned something – a trailer, a motor home, a boat or a tractor trailer. When someone got to ten of their items they won a quarter. Then at road stops, we let them buy something with their winnings. On the flip side to that, they owed us a quarter for ever time they asked ‘are we there yet?”

I ask you, how genius is that?  She says she didn’t hear a single ‘are we there yet?’ after the first day.

Armed with all this great advice, I shall sally forth into the wilds of the north.  If the van manages the trip, and if I don’t get eaten by a bear and if I retain my sanity (which is a BIG if) I’ll be back in a week.  Wish me luck. – Jen R, Staff Explorer!
[ad]

Previous articleCamping With Kids: Choose KOA for a Fun Family Getaway
Next articleShould Planes Have a "Families-Only" Section?