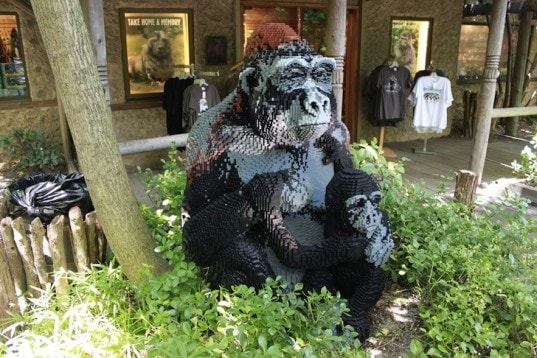 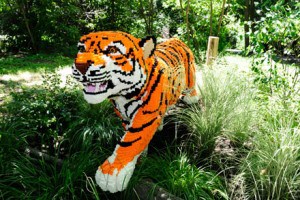 The tiger may not roar like the real one or the flamingo might not flap its wings, but the new animals on display at the Bronx zoo are sure to attract attention because of the simple fact that they have been made by assembling tiny little LEGO squares. Called the “Great Summer Zoofari: A LEGO Wildlife Expedition” Bronx zoo will hold the unique display till September.

It was almost a year ago that the concept of the LEGO animals began to take shape. The LEGO representatives began meeting with the zoo staff to decide on the animals whose life like models would be made. Some of the species were selected keeping in mind the Wildlife Conservation Society’s preservation efforts, such as the rare spray toad, found only around the Kihansi waterfalls in Tanzania. 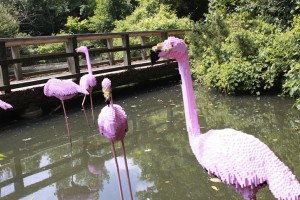 After the intitial design work, the LEGO craftsmen sat down to create the lifelike replicas of wild animals by assembling, joining and gluing together the LEGO bricks. From a baby Giraffe standing in the African plains to a Tiger poised between tall grass near the monkey house, the animals not only look real, they are also placed in their natural habitats.

Steve Gerling, a LEGO master builder who designed the primary models for the plastic menagerie shares his experience,

“We stack up bins and bins of different colors and different-size bricks. To sit and glue them together is a lot of fun. They actually give me money for this!”

Visitors to the zoo who also want to experience the LEGO safari can pick a Zoofari passport at the entrance and go through six stamping stations and a number of learning activites while they encounter the animals like the flamingos in a pool of water or the penguins marching through the zoo center.

“We do model sizes of things you can hold in your hand to a 21-foot great white shark [not on display] and everything in between,” says Steve proudly. 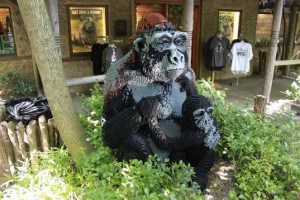 Visitors also have lots of bragging photo opportunities where they can take pictures with their head inside a caricature lion’s mouth or pose with a bear holding a fishing rod.

The making of the animals brick by brick involved a dozen builders who congregated at LEGO’s U.S. headquarters in Enfield, Conn. In a month the experts had created all the creatures by hand.

“It was pretty wild in the studio the past couple of weeks,” laughs Gerling, “but we have a great design process.”

He elaborates saying that they began with a computer generated image and posed it. The posed CG model was then scaled to life size and the image converted into LEGO design program that converted the image into a virtual model of individual LEGO brick.

The designer then adds in the intricacies that actually make the appearance of the final animal closer to reality.

“I start redesigning it: sculpting contours in it, putting stripes in, move a muscle here, a bulge there, putting features in the face,” he says.”Then I go back and actually make [physical] prototypes of certain parts, like the eyes, the teeth and so forth.”

Because of the challenge of building so many animals, the staffers worked non-stop eight hours a day.

“That is a lot of little squares to look at for eight hours,” says Gerling. “Your eyes start crossing a bit.”

So that the LEGO creatures can withstand harsh weather and inquisitive little fingers, the craftsmen build them around steel reinforcement and glued with solvent based glue.

“One of the things we are really serious about when we do design is pickability,” says Gerling. “It’s hard to stand next to one of these and not touch it, even though we try very hard to discourage it. It’s human nature. So the fewer small, pickable parts we put on, the better for everyone.”

The Bronx zoo staff is as excited as the visitors with the new LEGO animals on display. Bronx Zoo director Jim Breheny feels it is a great way to engage and educate kids about conservation while they are having fun. 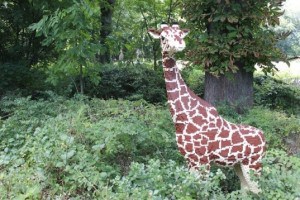 To show the process of building a lifelike animal, master builders will be present at the zoo this weekend to build a LEGO crocodile. Visitors can also take part in the project at the Moose House Lawn.

“We look for somebody who is really good at making things, with some formal design training. And a kid who plays with LEGOs his whole life is a plus,” says Gerling. “That being said, I never played with them before walking in the door here!” he laughs. “I had mud and sticks when I was as a kid.”

For the LEGO generation of today, it sure is going to be lots of fun in store this summer at the Bronx zoo.