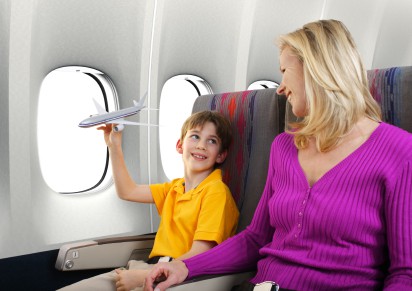 Flying with kids is a daunting task for most parents when they have to continuously come up with new ideas to keep them entertained. But for autistic kids, the journey can be more intimidating because of the sea of new faces and confused activities going around them. To help these kids and their parent with the in-flight experience and also make the crew adept to handling such situations, the “Autism Explores” program was introduced for the first time at the Newark Liberty International Airport.

The program invited five families with autistic children to be on board a pretend flight that involved all the activities of a real flight experience accept the plane never took off from the ground.

The children were allowed to get familiarized with the initial process before getting into the flight, the uniformed screening agents and also the queue of other passengers boarding the flight.

The program also intended to help the parents who not only have to deal with their scared kid but also the reaction given by co-passengers who are not aware of the child’s basic difficulty.

42 year old Jennifer Bahani, who is mother to Mathew and was part of the first program says,

“When you’re in a public situation and that happens, people are not always kind. It can be isolating.” She even avoids going to the mall with Mathew.

The Autism Explores program was developed at the Kevy K. Kaiserman Center for Developmental Medicine and Genetics at Albert Einstein Medical Center in Philadelphia. It was launched last month at the Philadelphia International Airport and plans are to take the program nationwide.

Another part of the program is to familiarise the airport staff with the idiocyncrasies of autistic kids. At the Newark Airport pretend flight several Transportation Security Administration officers and Continental flight attendants were onboard to get a practical experience on the situation. It was especially beneficial for them because attendants are not usually trained to meet the needs of autistic children in particular.

To make the experience as real as possible for the children the pilot and the co-pilot also made the customary announcements of flying conditions and weather although the flight was on the ground.

“It’s a beautiful day for flying. Sit back and enjoy the flight,” announced the pilot, Geoff Bender, a real Continental skipper.

The pilot, himself, father to 13-year old Teresa who is autistic, especially thought it was an important program that makes parents a bit more assured of their autistic kids future as adults and when they need to grow much more independent.

“I wonder what’s going to happen to my daughter when I’m not here,” Bender said

Rest assured, with this program, many autistic children may get to experience the real joy of flying. – Atula, Staff Writer