World Traveled FamilyLife Is An Adventure - Explore it Together!
HomeTraveling with kids 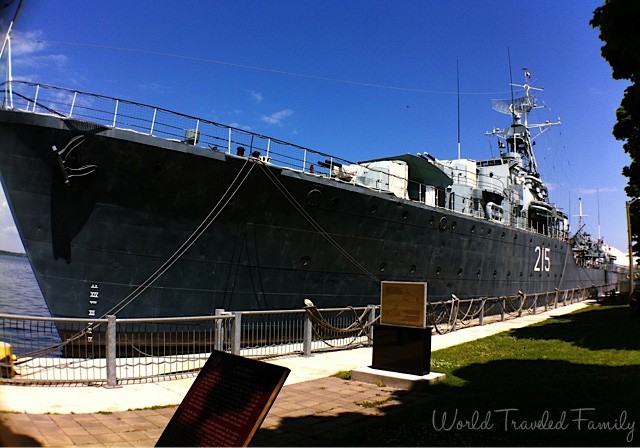 This Summer has been one big history lesson for my boys.  At just 4 and 7, I fully understand that their comprehension of historic events will be limited, but for me, it is important to give them the opportunity to learn when they can.  I have found that if I chose attractions that they find are exciting, they will be more willing to learn about how they came to be.  And this was definitely the case with the HMCS Haida.

Located in Hamilton, Ontario, this 70 year-old-ship has been beautifully preserved to teach future generations about the war.

Commissioned into the Royal Canadian Navy in 1943, the HMCS Haida was one of 27 Tribal Class Destroyers built; 16 for Britain, 3 for Australia and 8 for Canada.  Thirteen were sunk, 13 were scrapped and now, only the Haida remains.

In 1963 after sailing 688, 534 miles, and serving Canada in the Second World War, Korean War and Cold War she was decommissioned and re-purposed as a museum ship. She sat in Toronto Harbour at Ontario Place for more than 30 years before being re-positioned to Pier 9 in Hamilton.

When we arrived at the pier the kids were thrilled to start to explore this ship. The fee is beyond reasonable at just $3.90 for an Adult, $3.40 for a Senior and $1.90 for Youths aged 6-16.  Kids 6 and under are free! When we paid we were given an info booklet of the ship and the kids were also given a map of their own.

Not knowing where to start I was thankful that there were arrows on the deck to help us navigate all of the different areas of the ship.  Each public space is also numbered with an information plaque to give visitors more information about what happened in each space.

First up for us was the Main Galley. 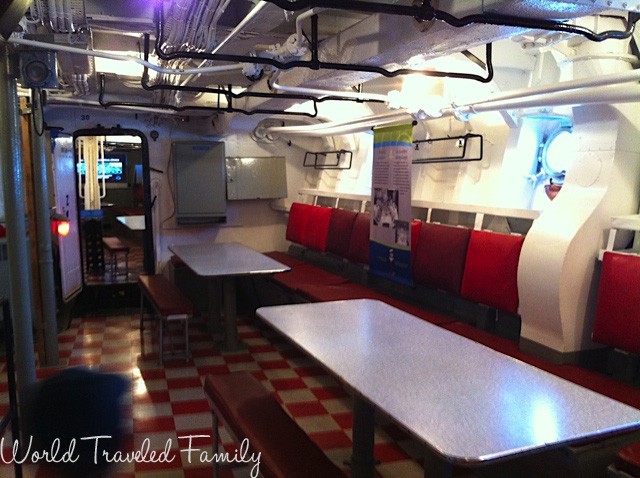 This area also doubled as sleeping quarters for the men who served in the ship.  There is a great video set up at the back of the room that gives visitors a look at the ship when it was in service and the brave men who served on her. 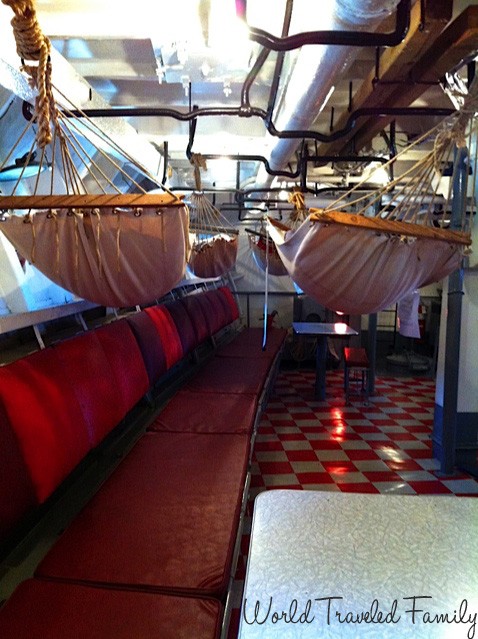 As we made our way through the ship my boys loved pointing out some of the cool vintage pieces like the pop machine in the crew store and the many typewriters in the administrative areas. 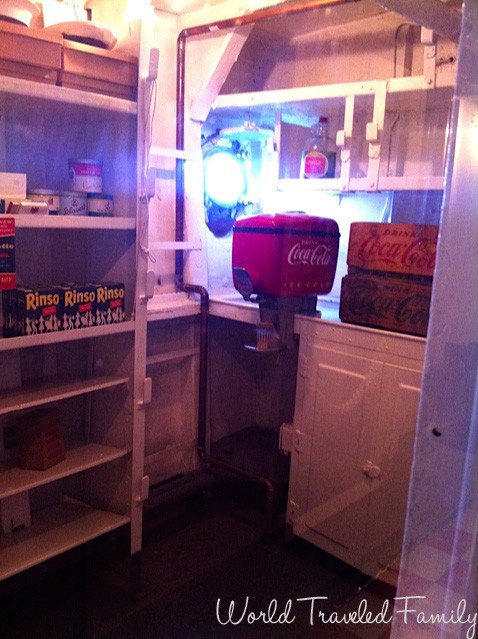 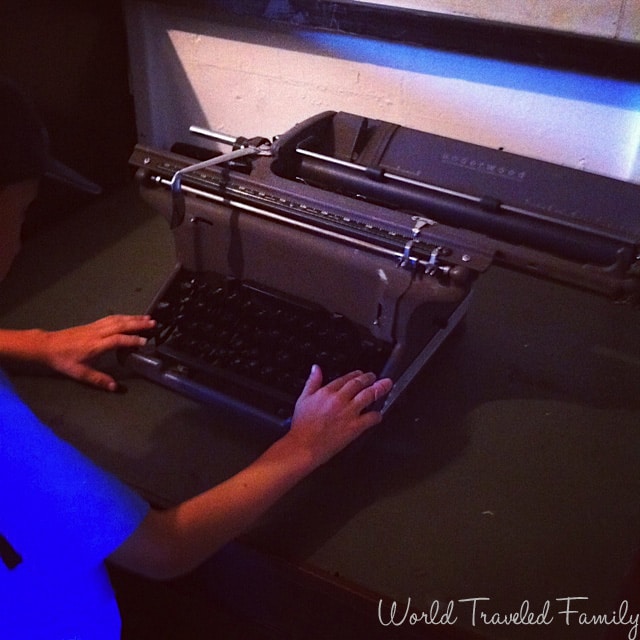 And while they were interested to see how the ship defended itself, I found the staff quarters fascinating.  The captain had 2 cabins, one that he used as his office and a second(just under the bridge) that he used when the ship was at sea. 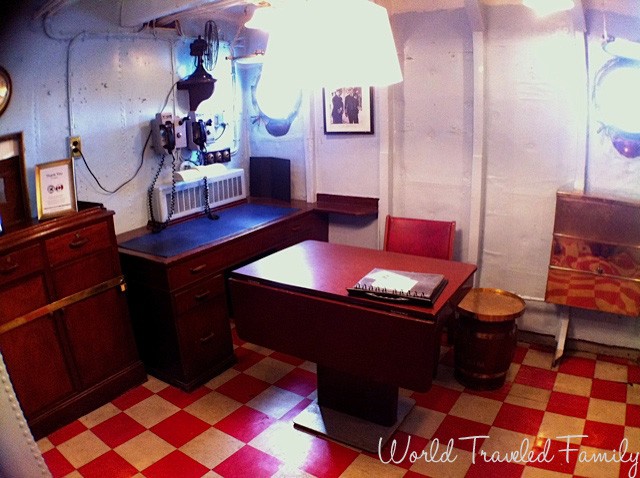 His day cabin(above and below), which was located just across the hall from the infirmary, could also be used as an operating room.  Two emergency surgeries were performed here while the ship was at sea.  It was also the only room onboard that had its own private bathroom(complete with a bathtub!). 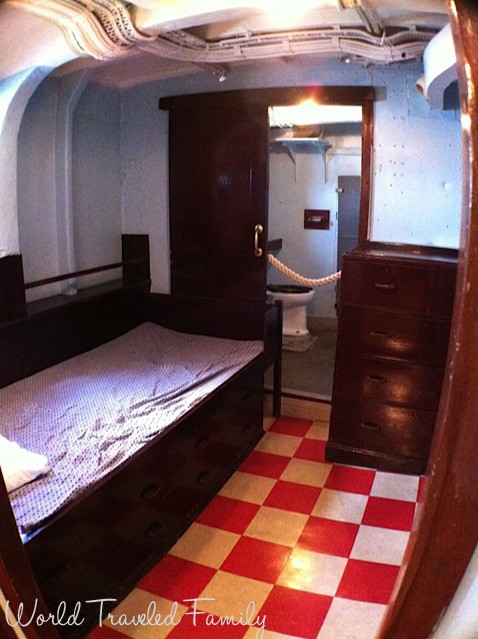 For almost 90 minutes we explored the HMCS Haida climbing down all of the trap doors to see what was around each corner. 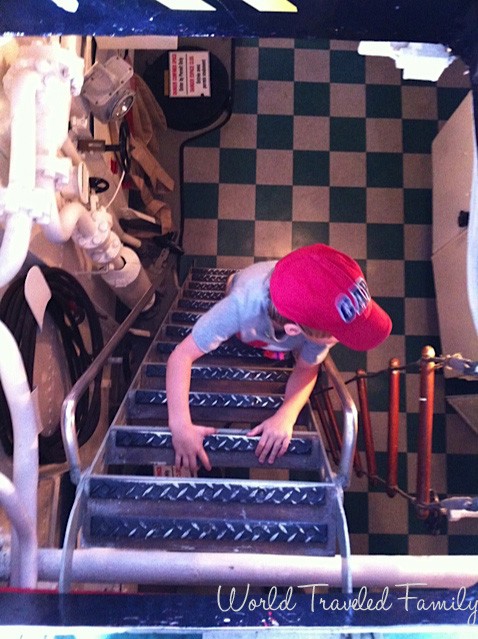 For my little guy the highlight was seeing the Artillery and also ‘driving the ship’. 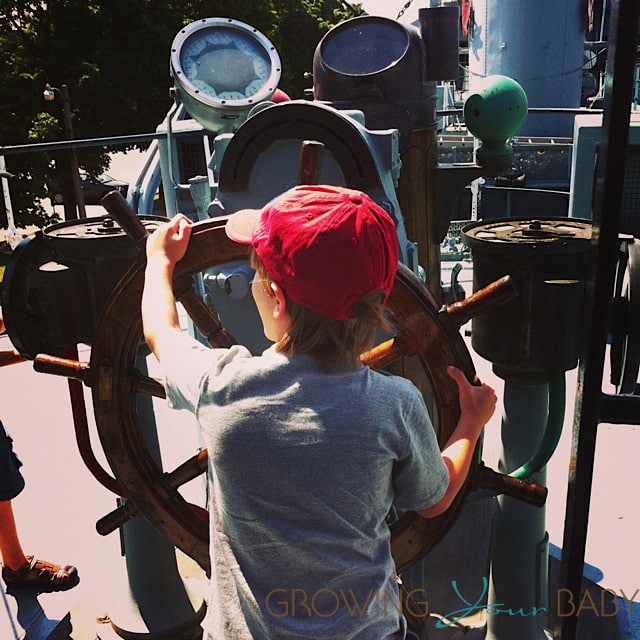 My oldest loved checking out all of the transmission areas of the ship and learning about how they communicated at a time when most homes didn’t have a phone. He was also interested in all of the artifacts in the Officer’s Lounge. 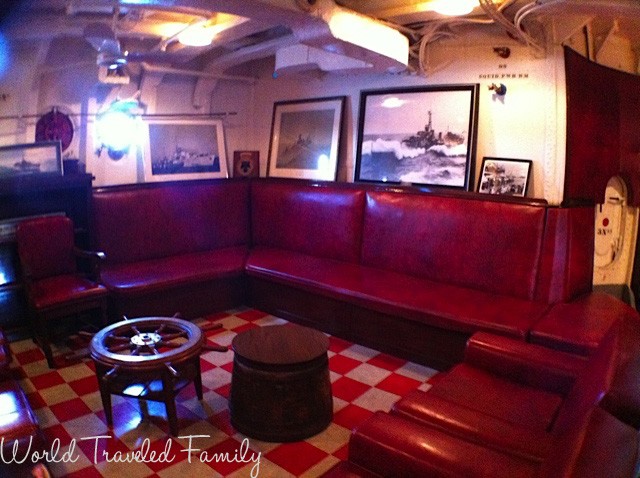 There are very few areas on this ship that are off limits and that is what made it so exciting for my two.  They love to touch and that was ok here.

If you are in the Hamilton area this Summer and are looking for something for the kids to do the HMCS Haida is definitely worth a drop by. There is plenty of parking right in front of the ship and a area with tables and chairs that would be perfect for a picnic.  If you want to make a day of it you can pair your visit with the Canadian Warplane Museum!  It is just on the other side of town and also a great place to visit for families.

Step Back in Time at Greenfield Village